When Martin O’Malley declared Baltimore “The Greatest City in America” most outsiders were derisive and dismissive. Even some longtime City residents were somewhat dubious of the claim. But those of us who truly love Baltimore thought “Why not?” Seriously… why not? It’s all subjective anyway, right? Who’s greater than we are?

With its diverse admixture of race, class, and culture, its ability to be at once small town and big city, and its central location in the great state of Maryland, Baltimore contains all the hallmarks of greatness; a symphony orchestra, a great central library, the Ravens and O’s, and more great locally made beer, art and music than even the most decadent bon vivant could hope to consume in one lifetime. It’s got everything, except the one thing that matters most when you’re dead drunk at 3 am with $4 in your pocket… Taco Bell. 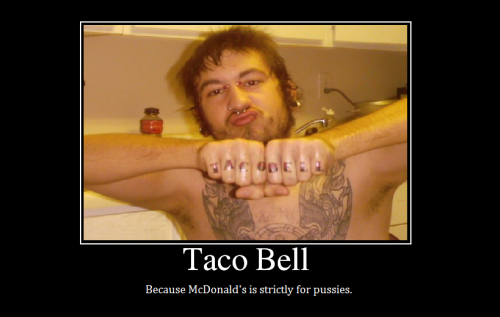 A visual approximation of the Chop's love for Taco Bell.

There is no Taco Bell in Baltimore City. There are no baja chalupas. No cheesy crunchwrap supremes. No Enchiritos, no nachos bellgrande, and no choco-tacos for dessert. Baltimore City, for all its greatness, is a Fourthmeal®-free zone. Chipotle may make a serviceable $6 burrito for lunch, but for the stoner-gourmet or the low-rent hipster who just closed down the bar with a tab full of Boh Ice and Johnny Drum shots, chipotle can’t hold a candle to the Five Buck Box®.

For Baltimoreans with a craving for meat-style taco filler and more Pepsi than they can drink for under $5 after 2am, we literally have to make a run for the border. For those of you on the east side, you’ve got to go all the way out to the depths of Dundalk’s Wise Avenue location. In the west it’s Rt 40 Catonsville. Southsiders have to make the trek to Ritchie Highway, and those of us in North Baltimore find our closest location over the city line at Loch Raven and Taylor. This is completely unacceptable. (Update: An astute reader confirms that the TB location on Rt 40 in Baltimore Highlands neighborhood is still open. It is inside the city, but still quite inconvenient.)

The Chop has a full-on non-ironic love for Taco Bell. Shut up. We do. We know it’s wrong, but we love it anyway. We want to hereby go on record that Yo Quiero Taco Bell. We also want to encourage our city neighbors to raise awareness to right this wrong, and to publicly implore Yum Brands to bless us with one or more Taco Bell locations, specifically in North-Central Baltimore.

The ideal spot, in our opinion, would be either the abandoned fast food joint on Howard, just above North Ave, or alternately as a tenant in the new Wal-Mart development, which is going to be full of crappy suburban stuff anyway. Failing that, we’d like to see an existing Yum®-owned KFC switch brands to a Taco Bell. The KFC location at Saint Paul and North would be an ideal candidate, and the one on Greenmount and 29th would also be most acceptable (because fuck it, we’ll just use the drive through anyway).

We love this city with all our Choppy little heart. We don’t even mind the thought of raising any future children in a house with no back yard, a school system with no money, or a neighborhood with no guarantees of safety. But to raise them in a city with no Fruitista Freezes® or no Volcano Menus® is tantamount to child abuse, and we’re just not sure that we could do it.