We can’t lie to you Baltimore, we’re getting old. At least in scene terms, 30 is no spring chicken. This is why it’s been a good long time since the Chop has seen Ted Leo and the Pharmacists live.

Seems like there was a time when we couldn’t help seeing Ted Leo play live. We’d go see some band like Ranier Maria and sure enough, there’s Ted Leo, opening the bill. We even used to heckle quite a bit. Ted Leo was just that kid in school who gave you the setup for a joke every time he opened his mouth. Good old Ted couldn’t finish one song and start another without saying something ridiculous. We weren’t the only one… the Elvis Costello, Paul Westerberg, and Matthew Sweet references were bouncing off the walls in those days. 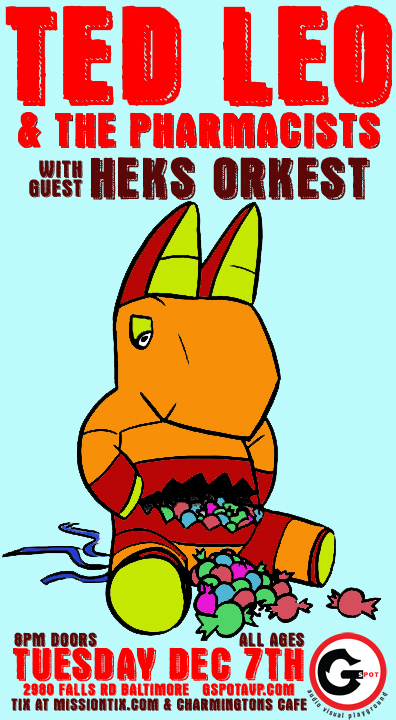 Since then Leo has stacked up new records, rounded out his sound, and become almost famous in the process. We haven’t seen him since because we’re frankly getting too old and jaded for stuff like sold-out crowds, advance ticket sales, trips to the 9:30 club, nightclub drink prices, etc. We just don’t like Ted Leo that much. We like him in a just-as-friends-maybe-go-to-second-base-if-you-can-get-us-a-bottle-of-Boone’s-Farm kind of way. Not a my-parents-are-going-away-for-the-weekend-you-can-totally-come-over-for-a-lingerie-fashion-show-and-backrub-marathon kind of way. We don’t like him like that.

So we were glad to hear that he’s playing the G-Spot tonight. This totally erases all the reasons we have for not going. It’s not far away. It’s BYOB. It’s not sold out. We don’t have to stay out until last call, and we don’t have to watch 4 other bands we don’t really want to see.

As near as we can tell, the only other band on the bill is Richmond’s Heks Orkest, whose name means “witches orchestra,” but who sound nothing like Rasputina. Some may even call them a supergroup, although this raises an interesting question:

What’s the difference between a supergroup and a bunch of guys who have been in a lot of bands before?

Hard to say. But Avail, Sparta, Engine Down, Denali, Kepone, and a several more former bands is a pretty good resume, and the mp3s on their site, How It Will All Fit and I’ve been Waiting are pretty good stuff.

Maybe even the kind of stuff we end up liking more than Ted Leo when it’s all said and done.