Well, it looks as though we’ve really lucked out this time. After coming home on Friday, we’ve had quite enough of bumming around the house and watching the rain. Look out Baltimore, the Chop is taking to the streets once again, and we couldn’t have come up with a better bill for our first show back in town than tonight’s lineup at the Charm City Art Space.

The new Art Space recently picked up a Best of Baltimore award for being Baltimore’s best all-ages venue from the Citypaper, who said “Do you even know what passes for punk these days for most of the 13-to-17 set? Trust us, it’s ghastly.” We agree with this statement wholeheartedly, which is why we’re urging you young choppers especially to get out and hear what straight-up no frills circle-pitting hardcore punk sounded like in the early part of the last decade. 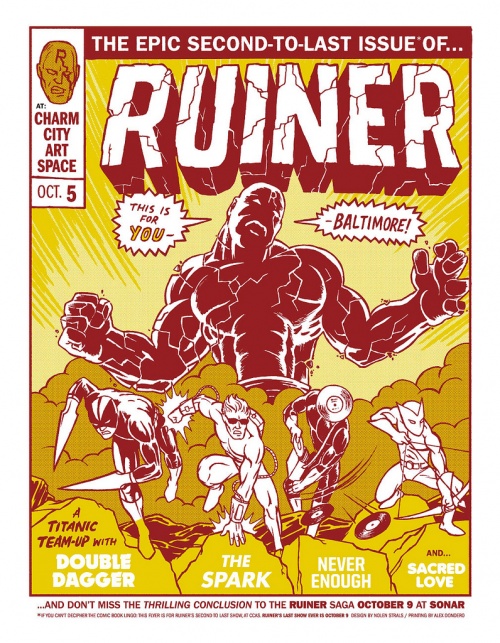 Punks of a certain age may have also noticed that some local music has become a bit precious of late; a little too damn clever for its own good, in trying to make rock look like art it’s no longer loud enough, fast enough or dangerous enough to fit anywhere under the punk umbrella.

We’ve put so much focus on bands and labels that we’ve fooled ourselves into thinking that they matter. They don’t. It’s a community of kids who matter, and at tonight’s show you’re going to see singalongs and circle pits, and no one will notice or care who happens to be holding the mic. That’s how it should be.

In case you’re curious though, tonight the mic will be held by Ruiner in their penultimate show, 6 years to the day after their first show on the very same stage at CCAS. Having recently returned from Europe, they’ll play tonight before calling it a career at Sonar this weekend.

They’ll be supported by Double Dagger, about whom we’ve already written plenty and who are possibly the only band in Baltimore who can match Ruiner pound for pound for staying power and hardcore punk bona fides.

We’ve got to give them credit for lasting as long as they have. The Spark and Never Enough, who are both reuniting for tonight’s show have been on hiatus for some years now, fully enmeshed in the world of day jobs and marriages and mortgages. We’ve been griping about reunions in general a lot lately, but we’ve got to give a pass to both of these acts. 2004 was a pretty good year, after all. Neither band has ever made a dime and these reunions are about as far as you can get from phoning it in for a payday. (Another interesting bit of trivia: Ruiner played the final Spark show in 2006.)

It’s not all strolls down memory lane though, as Sacred Love is also on tonight’s bill. If you want to hear what Baltimore HC punk is going to sound like in the next decade, make sure you show up on time.

All told this is more fun than anyone ought to have on a Tuesday, and since it’s the Art Space, you’ll still get home in plenty of time to rest up for work tomorrow, Grandpa.