We think we got it now. It’s all starting to make sense. It’s the weekend now, right? Like that time when everybody knocks off work and goes to do fun stuff? That’s howcome you haven’t been around so much, huh? You were waiting for the weekend.

Well it’s here, and there’s no shortage of fun stuff going on this weekend. We don’t know what you’re thinking of (hell, we never do, do we?) but we’ll definitely clue you in on what we’re up to.

First up we’re heading over to the Creative Alliance to catch the premiere of Going All Pro, the latest documentary from Baltimore’s own Charles Cohen. Going All Pro is an up close and personal look at Oriole Park’s Clancy the beer man. If that leaves you scratching your head, then shame on you, Baltimore. It means you haven’t been out to the Yard often enough.

When you go out to your neighborhood bar, you get to know the bartender a little, don’t you? You expect to see him there after a while and he becomes a friendly and familiar face and it wouldn’t be the same without him, right? Well, take it from the Chop, who watches more Oriole baseball than is healthy, and most of it from a sneaked-into box seat in section 12… these guys are just the same. Fancy Clancy is as much a fixture downtown as the Bromo-Seltzer tower. 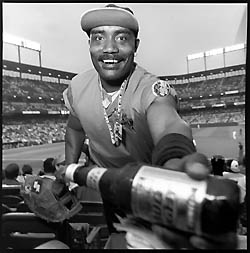 Director Charles Cohen is something of a Baltimore fixture in his own right. You might already be familiar with the Baltimore Community Issues Examiner from his contributions to Citypaper, including one from 2004 about Fancy Clancy and other publications or from any of his other films, including The Last Season, an excellent doc about the closing of Memorial Stadium. The Chop can remember seeing that one premiere, and there was no shortage of grown men crying, to be sure.

A q&a with Clancy and Cohen will follow the film, and lucky for us it’s only 41 minutes in length, which means we can make a 9 o’clock date at nearby Salt. That will leave us just enough time to get back uptown for Bar Bacon.

It’s Volume III, Book II tonight… whatever that means. We suspect it has something to do with comedy duo Velvet Glovular, Seaton Smith, Sean Jokes, Dorian Grey, and Mike Moran. “A Comedy Tour of Paradise Island” means you can trade in that PBR for a seabreeze. We won’t tell.