The Chop knows that you’re all dying to hear about Halloween with Louisville Slugger and the Roommate, and all the Sunday doings and advice, but we digress a moment.

Instead we want to tell you where you need to be this Friday, November 6 from 8-10 pm; namely Saint Mark’s Episcopal Church in Highland, MD (Just outside of Columbia).

Friday night the church is going to present “An Evening With Valentino Achak Deng.” (PDF) Deng is of course the subject of Dave Eggers’ 2006 Book What is the What, which chronicles Achak’s experiences as a boy-refugee from the oppressive Sudanese government and tribal warlords during the Second Sudanese Civil War. 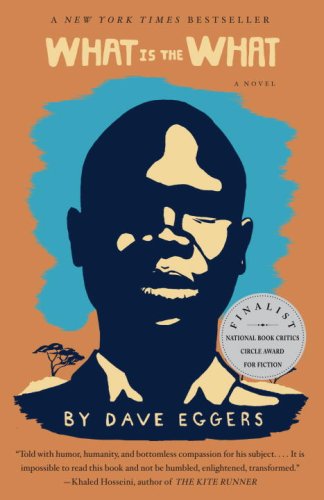 The Baltimore Chop was pleased to have the chance to read about the What last year in advance of our first trip to Africa, and we highly, highly recommend this book to anyone who will listen. We’re also a fan of his earlier novels ‘You Shall Know Our Velocity!‘ and ‘A Heartbreaking Work of Staggering Genius‘. Eggers is also the man behind McSweeney’s Internet Tendency, and has enjoyed recent acclaim for his adaptation of Where the Wild Things Are for the big screen.

In all of Eggers’ various projects though, What is the What will remain as his most unique and most important work well into the future. Billed as a novel, What was actually written by Eggers in close collaboration with the real life Achak Deng, and hews as closely as possible to Deng’s own experiences. As he explains it in the preface:

“It should be known to readers that I was very young when some of the events in the book took place, and as a result, we simply had to pronounce What is the What a novel. I could not, for example, recount some conversations that took place seventeen years ago. However, it should be noted that all of the major events in the book are true. The book is historically accurate, and the world I have known is not different from the one depicted within these pages.We live in a time where even the most horrific events in this book could occur, and in most cases, did occur.”

And make no mistake, Gentle Reader this book describes in detail some of the most horrifying human rights abuses, cruelties, injustices, and atrocities that one can imagine. As a small orphaned boy, Achak witnessed firsthand unspeakable acts like murder, pillage, rape, child slavery, starvation, drownings, and children being eaten alive by lions, and that was before spending 12 years in a Kenyan refugee camp.

Throughout everything though, Achak emerges as one of the kindest, gentlest, and most sympathetic characters in recent literature. His Faith in both the Lord and humanity remained unshaken even in the face of Job-like challenges. Make no mistake, the Achak Deng that Eggers presents is a truly exceptional man, and will make the reader seriously reevaluate his own ego and place in the world.

And judging by the real life Achak Deng’s ceaseless and tireless work in founding and promoting the Valentino Achak Deng Foundation the Chop expects the real life Achak to entirely live up to his literary persona. The VADF was begun with the proceeds from sales of What is the What, and works year round toward building community development in Southern Sudan, assisting Sudanese refugees here in the United States, and advocating on Sudanese policy issues. The foundation also recently completed construction of the Marial Bai secondary school in Southern Sudan.

According to the Church’s Announcement, Friday night’s program includes a lecture, Q & A session, and a reception and book signing. (The Chop will be bringing our copy from home, but we assume there will be copies available for purchase, which we strongly recommend.)

It is also to be noted that the church asks for a very humble $25 (minimum) donation per person to benefit the foundation, and that 100% of monies raised will go toward the foundation’s work.

The Chop doesn’t mind saying either that this is our favorite kind of philanthropy… the kind where the donation is quite reasonable and the donor enjoys immediate gratification in the form of an interesting evening out. Plus its always nice to look certain hipsters in the eye and ask:

What have you done for the Sudan lately? Eh?