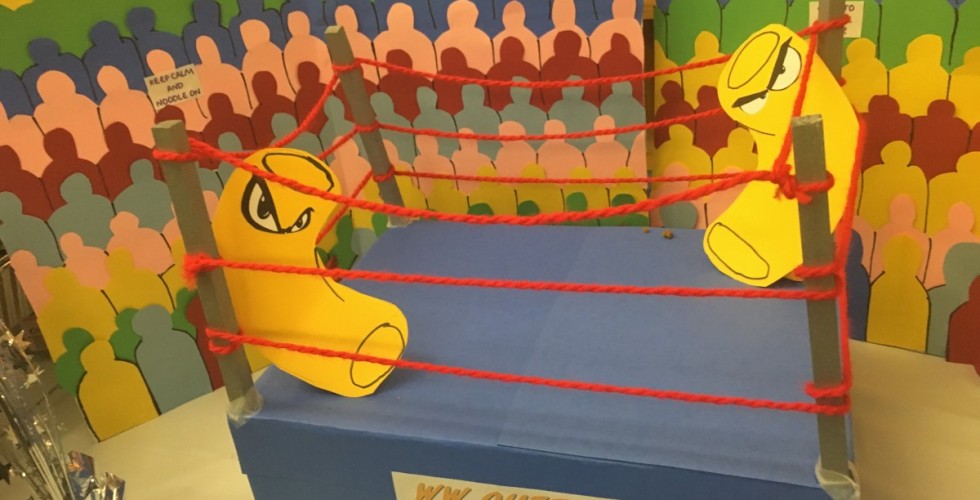 If there is one thing at which this blog excels it is the grand unilateral declaration. We’ve got our finger in the wind of the Zeitgeist over here or something. The Chop is like the Shingy of Greenmount Avenue, you understand. So when we make a formal proclamation of current trends it is not done lightly, but in all the deliberate gravity you would expect from a part-time local blog.

With this in mind, we are here to tell you this Monday, the 22nd of February in the Year of Our Lord two thousand sixteen that Baltimore’s inane and vapid fascination with all things bacon is officially over. Gone are the days of the bacon bloody mary and the maple bacon ice cream and all the rest of it. As with sushi and pizza and nachos and pho and pickles and breakfast-for-dinner before it, every food trend must come to an end, and often that end is the result of an upstart dish coming at the king to vie for diners’ attention.

It’s become clear to us that the dish most in fashion at the moment is, much like Fashion itself, something both timeless and ever-changing. With only two basic ingredients but literally thousands of variations, the ability to be both wholesome and familiar as well as inventive and unique at once, it took a longtime favorite with universal appeal to knock bacon off its greasy throne. We’re talking, of course, about everyone’s old (new) favorite… Mac and Cheese.

On Saturday we headed over to PEP Foods’ Vegan Mac & Cheese Smackdown and perhaps smackdown is the right word because we were nothing less than gobsmacked by the turnout and enthusiasm of the crowd in attendance. Take a look at this line of people… 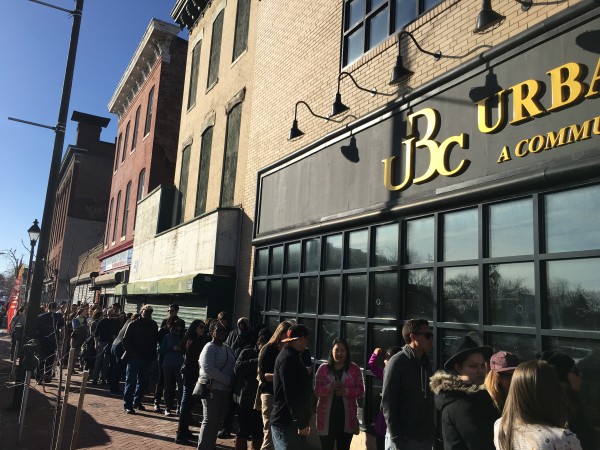 That’s not all of the people, mind you, it’s just what fits in the frame of this photo. In addition to this line which is two blocks long there are also a few hundred inside the building, and many more yet to join the back of the line. When we heard this event might draw 500 people we thought ‘How the hell are they going to get 500 people to come to West Baltimore to eat macaroni?’ But apparently vegans are better networkers and promoters than we’ve given them credit for because there were by our own estimation nearly 1000 people there to sample vegan mac.

The last time we personally attended a mac and cheese cook-off was at Honfest and if we’re being honest, that one left a lot to be desired. It only drew three or four entrants, and ten bucks didn’t get you much in the way of samples. Not so with Saturday’s event. PEP’s website had the count of entrants at a whopping 28 different recipes. Look at all this mac… 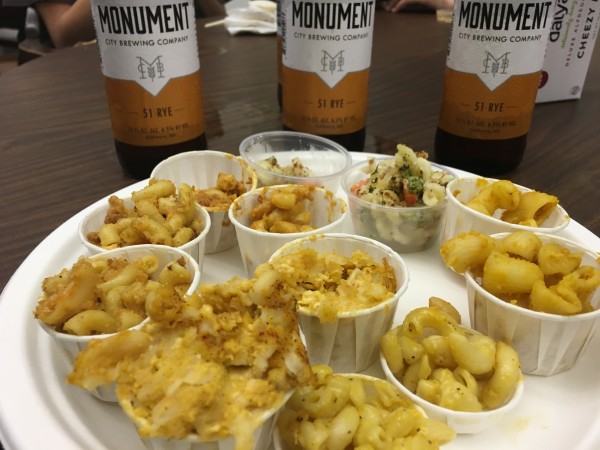 Both individual chefs and virtually all of Baltimore’s big names in Veg cooking like Red Emma’s, Land of Kush, One World Cafe, et al were on hand to compete, and mac fans who hung around all afternoon were rewarded with the encouragement to “eat until there’s no more mac left!” That’s how you run an event, ladies and gentlemen, and it stood in stark contrast to a festival for a certain salted and cured meat which went very poorly two years ago. Another contrast is that while that crummy bacon festival was run by a promoter for a profit, this one was a fundraiser to help PEP open their commercial kitchen in West Baltimore. We’ve got to say, there’s been a lot of talk of food hubs and food halls and what have you around town lately, but after coming out to this weekend’s event and seeing how well it went, and having a look at PEP Foods’ website we’re convinced they’re the real deal- the kind of folks who not only deserve community support, but also give it right back in an effort to create a virtuous circle. There’s been a lot of anxiety and disappointment in this city lately, and some good people serving up delicious comfort food is particularly welcome for 2016.

In the end it’s not important whose recipe was the best gluten free or the best oven-baked, or even the best overall. We came away from the Smackdown with a real sense of positivity and encouragement for a change, and as far as we’re concerned everyone involved is a winner.

But wait, there’s more! If 28 different versions of vegan mac and cheese isn’t good enough for you, there was even another mac and cheese cook-off last night to benefit Moveable Feast. We don’t know much about it beside what’s on the Facebook event page, but apparently it’s the third annual version of the event which has outgrown the confines of both Liam Flynn’s and Blue Pit, and was held this weekend at Peabody Heights Brewery with somewhere between 100-200 attendees.

Safe to say that in Baltimore 2016 is the year of the Mac.