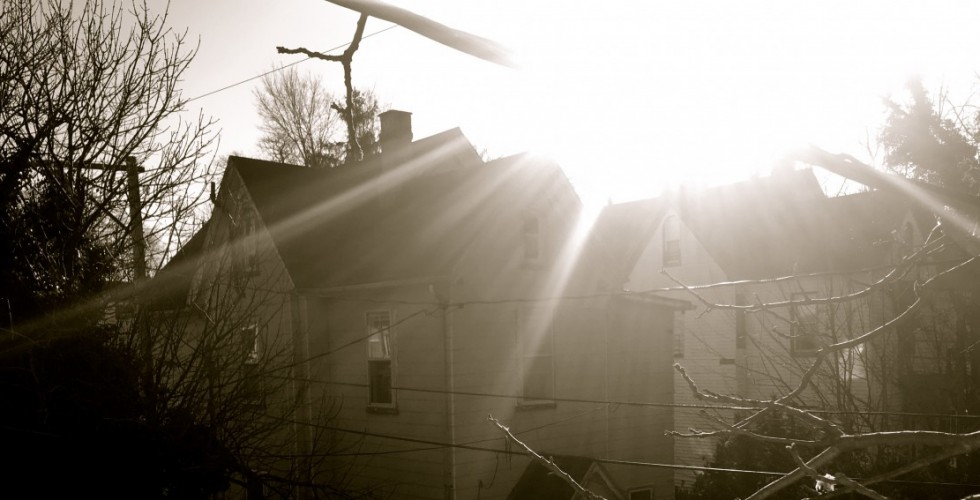 Everyone is familiar with the bizarre urban practice of shoe tossing, the dangling of old shoes, usually sneakers from overhead wires. No one seems to know the full story behind it, and like so many urban legends there probably is no full story to know. Most of what we think we know about it is total bullshit.

But there is one thing about shoe tossing that we do know for sure: it’s ugly and stupid and it seems to happen much more often in crummy neighborhoods like ours than in more expensive neighborhoods like Canton or Roland Park. Like other elements of the urban experience some people may romanticize shoe tossing, but when you have to live with it every day it’s not so cute. Shoe tossing is just litter- litter in the sky that can’t be picked up, that stays there for years and just gets uglier as time passes. One of the best ways to tell a nice neighborhood from a garbage neighborhood is to ask oneself literally, “Am I surrounded by garbage?”

The Chop is intimately familiar with what it’s like to live around tossed shoes, as there was a pair dangling in the alley behind the Chophouse when we moved in. Being a seaman by trade, we’re very much accustomed to lines and ropes that wear out in the elements and need to be replaced. If a 9″ hawser needs to be end-for-ended twice a year, these laces should rot in the weather and the shoes should fall down sooner or later, right? Wrong.

As one of the hoodrats in this documentary boasts, the pair of shoes he tossed in his neighborhood hung there for nearly twenty years. Twenty years!!! They’re probably still hanging there today.

With every year that’s passed, this pair of shoes in our alley has bugged us more and more. Every time we’re out picking up litter or sweeping up leaves in the alley it doesn’t matter how hard we work: the place will still look trashy with these shoes hanging there. It’s insidious. When your neighbor turns his backyard into a trash pile at least you can call the city and they’ll eventually clean it up. No one is coming to cut down shoes off a line. Not 311, not Verizon, BGE, Comcast… no one cares.

In six years of living under these shoes we’ve finally reached the point of exasperation. We went to Home Depot to see about renting one of these to possibly cut them down, but all it got us was a nice lecture from the tool rental guy about how overhead wires are dangerous and we should leave them alone and live with them. Or call the utility. Consider it a mark of the Chop’s maturity that we stood there, deep in the county suburbs in a big box store, and nodded silently and said “Okay, yeah, you’re right.” to this dopey fool who doesn’t have to live in a garbage neighborhood and thinks that any utility would bother to come retrieve a pair of shoes.

We just became even more determined. We brought out the ladder. Reached up there with a man-helper and an old paint roller, just to see if we could reach. We could, but all we could really do was get the roller frame tangled up. The shoes weren’t moving.

We climbed down. We paced the alley. We cussed. Duct taping a knife on there or something wasn’t gonna work.

Eventually the answer came to us. Get some paper. Crumple it up and tape it to the end of the stick. Climb up the ladder. Light the paper on fire. Torch the laces.

It was so simple we should have thought of it five years ago. Take if from the Chop- if you’ve got the ghost of old shoes haunting your neighborhood, you can kill it with fire.