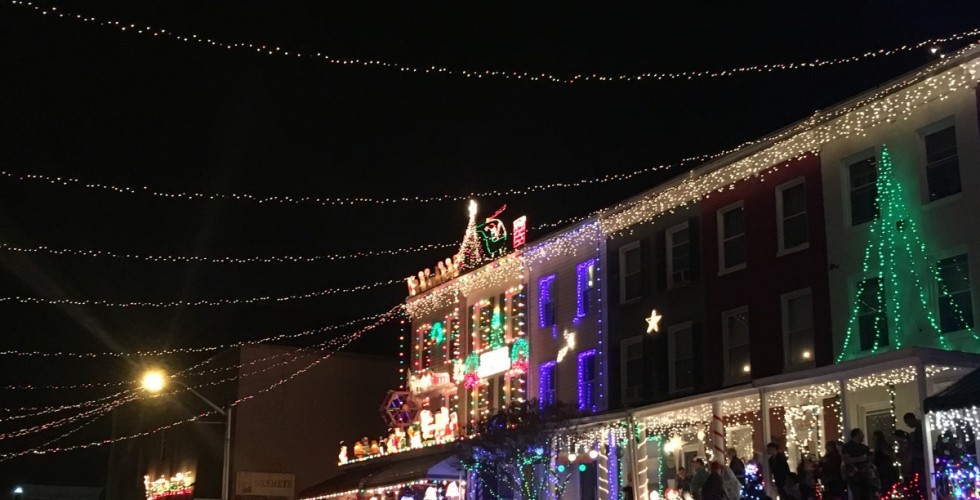 December is well nigh in Charm City and it is the most Christmassy time of the year. Of course, Santa’s not the only one making a list- writers and bloggers in all corners of the Internet are busily tapping out their suggestions for making merry during the holiday season, and since we here at the Baltimore Chop love a good yuletide as much as the next blogger we thought we’d share a little about what we’ll be up to this holiday season.

Thursday, December 3. The Lighting of the Washington Monument kicks off the start of the season this Thursday. Ever since we started arriving by bike this event has been a joy to attend. Not having to worry about traffic or parking makes our holiday season all blessed- no stressed. This year’s lighting includes a beer garden open from 4:00 until 8:00 and as you already know the Chop loves a beer garden. Between the warm temperatures and the newly renovated monument this year promises to be a lighting par excellence.

Sunday, December 6. The Mayor’s Annual Christmas Parade hits Hampden again this year. We’ve never bothered with it before but since 2015 will be our last chance to show up drunk and boo at SRB as she floats over the litter and potholes of Falls Road we’re inclined to take it. Word is that she didn’t even bother to show up last year, and this year she’ll probably try to weasel out as well, but hopefully she’ll at least send a deputy mayor for us to boo. Did you know that Baltimore has four deputy mayors? That’s what the city website tells us. Maybe they’ll all show up. That’s a lot of booing!

Saturday, December 12. It’s become something of a Christmas tradition for the Charm City Craft Mafia’s Holiday Heap and the MICA Art Market to be held on the same day, and that tradition continues this year on the twelfth. We love it, because it’s so easy to shop at both with just one trip and this year those with an extra long gifting list can also extend the trip with a visit to the Women’s Industrial Exchange which is now featuring gifts from local artists every weekend in December. For those who can’t make a shopping trip that Saturday Baltimore Magazine has a full roundup of area craft markets.

Sunday, December 13. Speedy Ortiz/Beauty Pill at Metro Gallery. The holidays aren’t all elves and Krampus and trips to the mall. On the twelfth day of Christmas my true love gave to me two tickets to see a real goldilocks of a show. Why Goldilocks? Because we have here a pair of bands who are right now in their prime, doing better and better work all the time and who by rights should be bigger than the Metro Gallery at this point, but can still slide right in there for a $12 show. Goldilocks too because as we approach middle age and are seeing more and more reunion shows on our radar it’s nice to be able to go see some very current post-punk bands who are playing adult music for adults without being all stuffy about it.

This show is also a fundraiser for the Girls Rock Camp Foundation. Nothing says ‘adult’ like going to a show and getting a receipt for a donation before the year’s end so you can itemize your taxes, so dig deep this holiday season.

Thursday, December 31. For once, your humble Chop finds himself spending Cuffing Season in the company of a beautiful woman, so our normal NYE routine of sitting on the porch with a fifth of armagnac and listening to the police scanner at midnight just ain’t gonna cut it. Nope, this time around we’re going all-out to celebrate the end of a pretty tough year at Baltimore Social’s Shades and Suits NYE Party. Kevin Plank and the folks at the shiny new City Garage are pretty bullish on Baltimore’s future. It’s so bright, in fact, that we all get to wear shades. With a buffet and premium open bar included in the ticket price, we’re hoping some of that unbridled optimism will rub off on us in the new year.