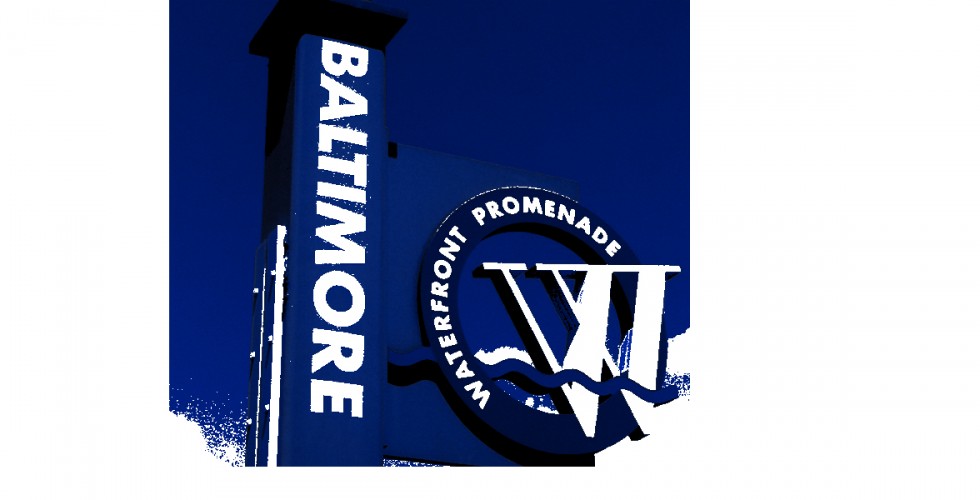 Today we’re going to take a look at signs found in marginal neighborhoods. We’re not interested in specifically defining ‘marginal.’ You can plug in any mediocre adjective you like: blue collar, up and coming, working class, whatever. Wherever you see signs like these you’re not in the best neighborhoods, nor are you in the worst. (Read part II about signs in bad neighborhoods here.) 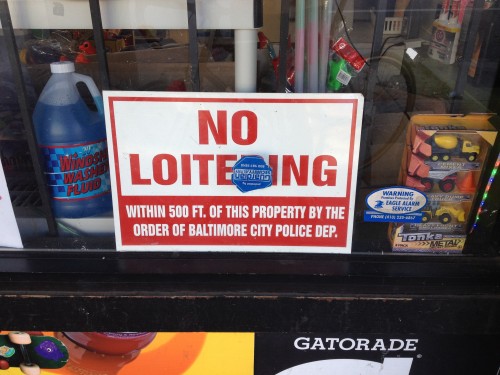 The various forms of No Loitering signs are most prevalent in neighborhoods with working class or lower middle class incomes. These are the kinds of places both here and nationwide where shops are open for business and streets and sidewalks are active with people, but where there are still enough knuckleheads with not-much to do hanging around during the day. You don’t see as many of them in nicer neighborhoods because they’re somewhat declassé and you don’t see them in really bad neighborhoods because people have largely given up on minor things like loitering. 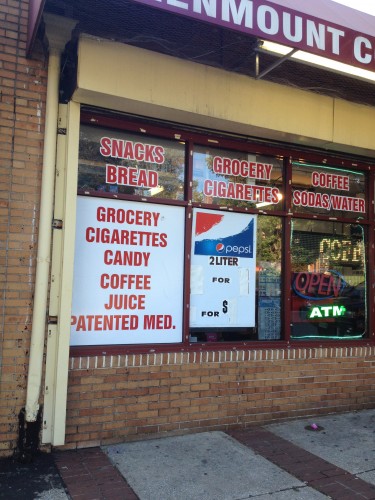 There are convenience stores in all sorts of neighborhoods but the signage in the window of this one is typical of marginal neighborhoods. It’s not as upscale as say, a legit 7-11 franchise, but it came from a signmaker and its meant to be welcoming and let you know that the store can meet your basic convenience needs. You won’t find really good coffee or current glossy magazines here, but neither will you be buying from behind bulletproof glass. 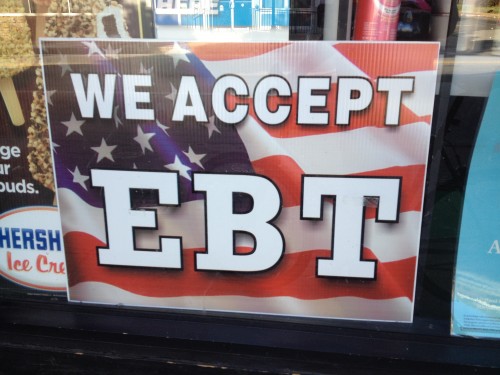 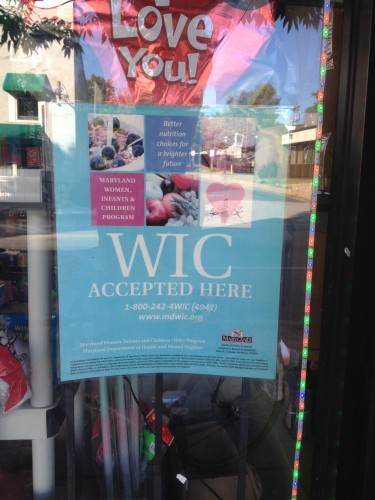 The surface message with these two signs is ‘we accept food stamps.’ Of course the subtext is ‘a whole lot of our business comes from food stamps and there are enough folks using them very close by that they’re our target customer.’ Cash customers are welcome too, of course, but you’re not going to see a lot of folks in here breaking out the platinum card or Apple Pay.

This sign’s sort of a double-edged sword. On the one hand people in the neighborhood have enough cash to support a jeweler. On the other hand they have so little money that they need to sell off their jewelry for cash now and again. 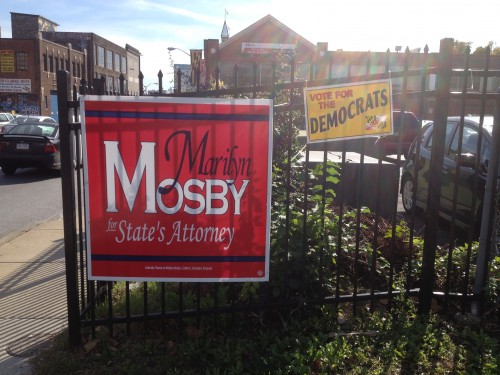 Here’s a peek at the good old Vote For the Democrats sign that’s becoming something of a tradition. These signs are pretty much litter and people in affluent neighborhoods with strong community associations and leaders wouldn’t tolerate their presence for even a day before some volunteer went to cut down most of them. But the people who campaigns pay to put them up don’t bother going into the worst neighborhoods, where concentrations of likely voters are sparse. So these pieces of trash end up in the middle ground of marginal neighborhoods where people care enough to probably vote, but not enough to study up on candidates or keep their streets clutter free.

This sign is for a cooperative garden in Station North. It’s a double edged sword as well because what underlies it is that there are enough community minded activists around to change land from an empty lot to a productive garden, but also that the land isn’t worth enough for any development beyond a garden. Community agriculture is great, but it’s inconsistent with the planning principles of highest and best use. 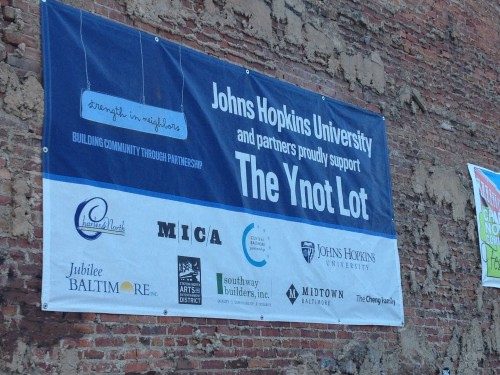 Here’s another empty lot that’s been given over to temporary usage in the neighborhood. Many people might pass the lot and see arts and crafts or yoga or music going on and think ‘hey, that’s nice.’ and it is. But as the sign shows there’s a whole lot of foundation money flying around behind the scenes. But where there is foundation money there’s big fat capital C Capital not far behind it. 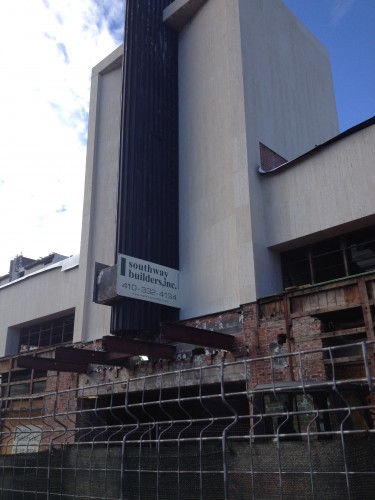 And here’s a sign of capital flowing in. Where foundation money painted murals on this building very recently, Capital is knocking holes in that mural and is coming to stay. A builder’s sign on a project this size is a very clear indication that a neighborhood is changing. 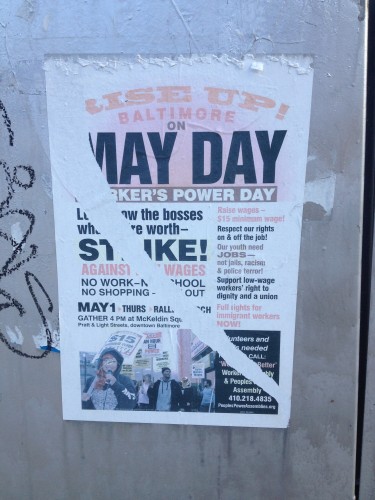 We’re going to be seeing fewer of these in the future. So long May Day rally signs. You were fun for a while. 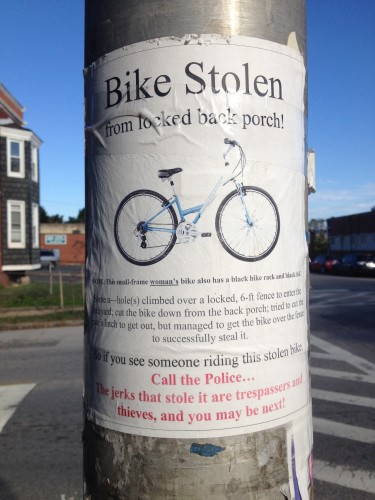 Speaking of righteous anger, this is maybe our favorite sign in this whole series. You’d only find this in a middling neighborhood where folks are still fighting the good fight against crime, but enough crime exists that they’re permanently fed up. This woman lost her bike and can’t immediately afford another one. We’d be pissed too. 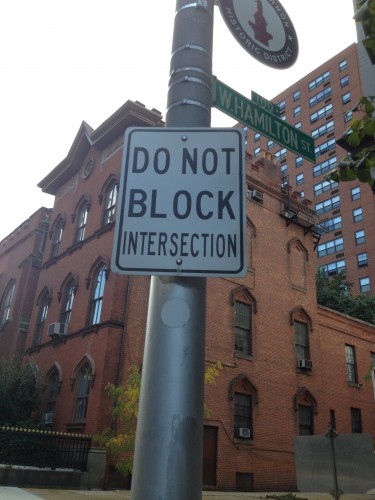 This sign says Do Not Block Intersection but what it also says is “You are now entering downtown.” If you see one of these congratulations, you’re downtown. Act accordingly. 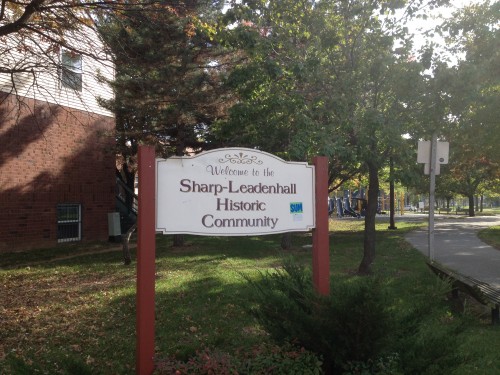 Also on the theme of signs that indicate borders, here’s a good example of one. The sign itself is pretty generic and uninteresting, and even the word historic is so overused as to be meaningless. But arguing about where one neighborhood ends and another begins is a favorite pastime of Baltimoreans going back generations. These signs don’t get placed by accident and if you see one you are definitely crossing from one distinct neighborhood to another. Keep your eyes open and start noticing things and you’ll see what we mean.