It would be difficult to overstate the importance of German immigration and culture in the history of Baltimore. At the same time it can often be easy to overlook. Most histories on the founding of Baltimore and Maryland make much of the original English colonists and prominent families like the Calverts and Carrolls, but it was the continuing waves of continental immigrants, most of whom were German, from the mid-1700′s until World War I which turned Baltimore from a settlement to a city, and then to a booming industrial powerhouse.

The Wikipedia article on the topic provides a good overview and cites the rise of class consciousness in Europe and the agreement between the recently completed B & O Railroad and the Norddeutscher Lloyd line as important factors in swelling the ranks of the city’s German population. For our part, one of the Chop’s great-great grandfathers was one of those German immigrants. They’re the reason why today we’ve got places like Brewers’ Hill and traditions like Sauerkraut for Thanksgiving.

Speaking of Brewers’ Hill, that neighborhood makes a fine proxy for the city, and the nation as a whole. The New York Times reported this week that Baltimore is among the nation’s leading cities in attracting yuppies. (The Times calls them ‘young college graduates.’) The numbers show Baltimore well above the national average on the yuppie scale, and experts like Harvard’s Edward Glaeser are more than happy to explain them ad nauseum, but it doesn’t take a genius to walk around any waterfront neighborhood and notice that there aren’t nearly as many old people or working class people as there used to be. Saabs and Volvos outnumber Chevys and Harris Teeter has replaced Santoni’s. In Brewers’ Hill today you’re more likely to bump into a woman in yoga pants than a man in overalls.

This near-total takeover of the central city by the young and privileged and the developers who cater to them is one of many reasons why Zion Church’s annual Sour Beef Dinner is such a magical event. Untouched by gentrification, Zion has been in continuous existence since 1755, and at its present location downtown for more than 200 years. Stepping into the Aldersaal is almost like removing oneself from the present and going back in time 50, 60 or even 100 years. There is no seasonal charcuterie, no 1080p flatscreens with Sunday ticket, and no celebrity tie-in á la Guy Fieri. 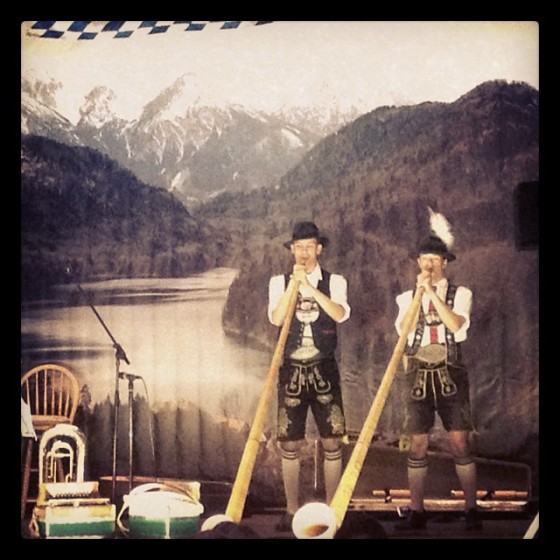 What there is is sour beef and dumplings made with love by little old ladies. There’s also pints of German beer (bring your own stein or buy one at the Christkindlmarkt). The scene wouldn’t be complete without some Live German Beer Hall music. And there’s also little touches like frauleins selling pretzels and strudel.

Most of all though there’s the warm hum of fellowship and energy that you can only find among a true urban community with deep authentic roots in its home. That’s something that all of the Edward Glaesers, Richard Floridas and Bill Streuvers can’t replicate at any price.

The Details: Zion’s Sour Beef Dinner takes place from 4:30-9:30 tomorrow (10/23) and Friday (10/24). Saurbraten dinner is served until 8:00, and can be had for a $17 donation to the church. Visitors will want to opt for the upstairs buffet style dinner as opposed to the church’s basement. German beer and wine are available for additional cash donations. (Last year’s beer price was $3 or $3.50 if we recall correctly.) Zion is located at 400 E. Lexington St. downtown. PDF flyer here.