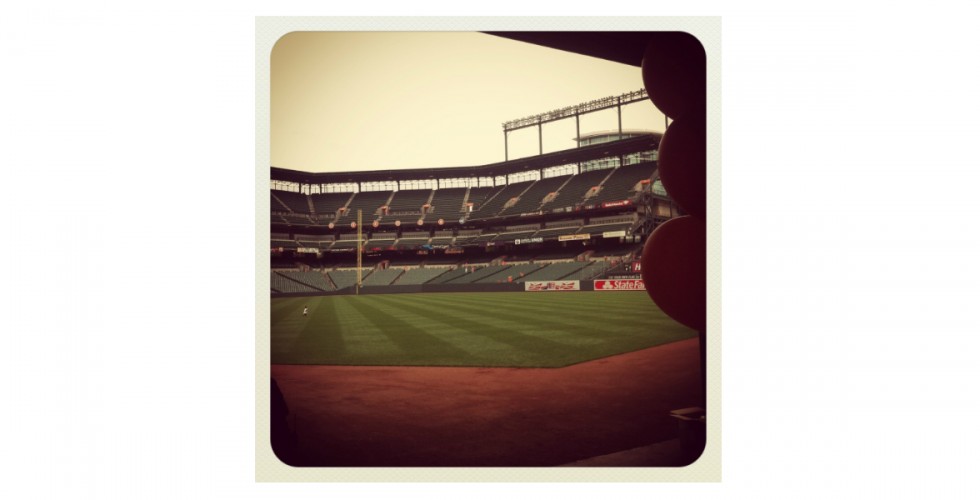 Any one wants to get discount pills that reduces tension from the Indianapolis drugstore with no prescription on this website Prozac easily! And get the best offers for pills that reduces tension. The best service on the Web. The order of application Prozac is used orally Capsules are taken whole, their shell should not be damaged pharmacy-mall.net The drug is washed down with a sufficient amount of liquid.

Today’s post is written by guest author and friend of the blog Anthony Lozupone, who just completed his first season as an usher with the Baltimore Orioles.

Being a lifelong fan of the Orioles I would always look at the ushers at games and think that would be the coolest job in the world; being at all the games for free, meeting new people, being close to Oriole players, seeing all the visiting teams, and being part of the team somehow. I never thought I could do it because of the commitment required.

But this past January my brother told me the Orioles were having a job fair. I was like, “No way I’m doing that.” He said ‘you can make the time for it, just go and see what they say or have.’ ‘I will go with you.’ he said. So I went down to the Warehouse and filled out an application and had an interview. Two weeks later they called and said I was hired. I was still scared because no way I was working there unless I could see and watch all the games. I got hired but ushering wouldn’t be a guarantee right away. I had a good attitude and decided to go for it thinking of all the money I would save not buying tickets or sitting at a bar watching games when O’s were home.

The training was awesome. We had a full tour of the park. I had never before been down below the stadium. It’s a whole different world down there- everything’s top notch for players. Our training sessions were held in both the O’s and visitors’ clubhouses. Thinking of all the great players that have been in those clubhouses was really humbling. I remember going to bathroom in visitors’ clubhouse and was thinking Ken Griffey Jr. might have taken a leak here in this exact spot.

All of the current stadium employees and new hires were at the training sessions. There are some real characters that work there- from World War II vets to the strange person that lives in your neighborhood. I know you have seen them at the park. I also got to see “The Book” during training. The Book is a three ring binder with a picture of everyone who has a lifetime ban from Camden Yards and what they did. There are around 300 people in it.

All new rookies that work at the Yard are required to work every post in the ballpark for two months before requesting a permanent position. Some workers like changing it up and getting moved from series to series. I wanted a permanent spot for every game, no interest in moving around. Opening Day came and I definitely began paying my dues.

I had to work gates, checking bags or scanning tickets, sit in legends park and make sure no one jumps on the statues, walk the ramps from lower level to upper deck making sure no one is smoking, sit outside of the smoking section and make no one sneaks into the park, sit on the upper deck in a spot and make sure kids don’t throw things over the side wall down below… you catch my drift. I was missing most of the action of the game. A great silver lining about working there is that the game is always in your ear on the loudspeakers or on a TV somewhere close by so you can stay with what is going on.

One detail I had been assigned was working on the club level in left field where the drink rail is for a three game series. I loved it. All of it. The coworkers, the fans that are locals there, even the view is beautiful with the warehouse in background. I begged for that spot, even went to one of the head supervisors at the park and told him I would be a happy O’s employee if you put me there somewhere; I would be there every day.

My two months were up after the first week of June. The Oakland A’s were in town and I reported to work in my new permanent position: Club Level 3. This is the group which works on the Club Level from about section 260 all the way to section 288; from about behind 3rd base all the way around to left field. I was like, YES! I get up there and report to my team leader and he says you’ve got ushering section 278/280 (underneath the numbers 42 and 8 in LF.) I was so happy that day. My coworker next to me was a rookie also and he was excited to get section 278/276 that day as well. We high fived each other and I settled in. My coworkers liked me and the fans liked me. I was feeling good.

The Club Life, we call it.

The Club Life is air conditioned with nice bathrooms. There’s never any rain on you during a delay. You’re in the shade during day games. There are smaller sections which are easier to monitor. We’ve got a beautiful concourse like a hotel lobby with great photos of Orioles history. Sometimes there are even famous celebrities walking around in a suite behind you, or sitting in your section just being fans. I love it all.

Another perk is getting to the park early to watch batting practice and drills. This season I would always walk to my post by cutting down to left field and walking in front of the first row along the wall where I’d see the same guys and say hello. Oriole pitchers Chen, Matusz, McFarland, and Gonzalez were always in that spot shagging balls as well as left fielder David Lough. They would even start to say hey cause I was a familiar face. Getting to my spot in section 278 before games early was great also. No worries about my life while there at the park watching the players doing drills.

Speaking of drills, the second deck in left field is considerably far away from home plate. I only saw three players put balls up to me during batting practice during this season; Adam Jones, Delmon Young, and Miguel Cabrera each did it a few times before a game. That was a treat for sure. The last time someone did that during an actual game was Mark Reynolds in 2011. (video) My favorite thing at the park is seeing a father with his son at a game. It’s just a wonderful thing. Second is visiting fans seeing our park for the first time and loving it. Third is fans going to games solo and not caring they are alone there.

Now that my first season’s in the books I’ve met some great people. I have made lifelong friends at the ballpark, from Baltimore to Seattle staying in touch on social media and talking ball with everyone from the regulars to fans of visiting teams just passing thru. I went to all 81 home games. My baseball IQ has risen just by being around old timers and crazy young kids who are into it. I fell in love with the game on a whole new level. I’m not just an O’s fan anymore, I’m a fan of Major League Baseball. I’m almost at the point of those writers and game callers on TV who you don’t even know who there favorite team is. I like it ALL.

Anthony Lozupone is a lifelong Orioles fan who’s been going to games regularly since 1977. When he’s not at the Yard he can be found navigating the streets of Fell’s Point by bike or building residential and commercial outdoor features with his company Custom Stoneworks & Design. You can follow him on Twitter at @loZuponeFellsPT.