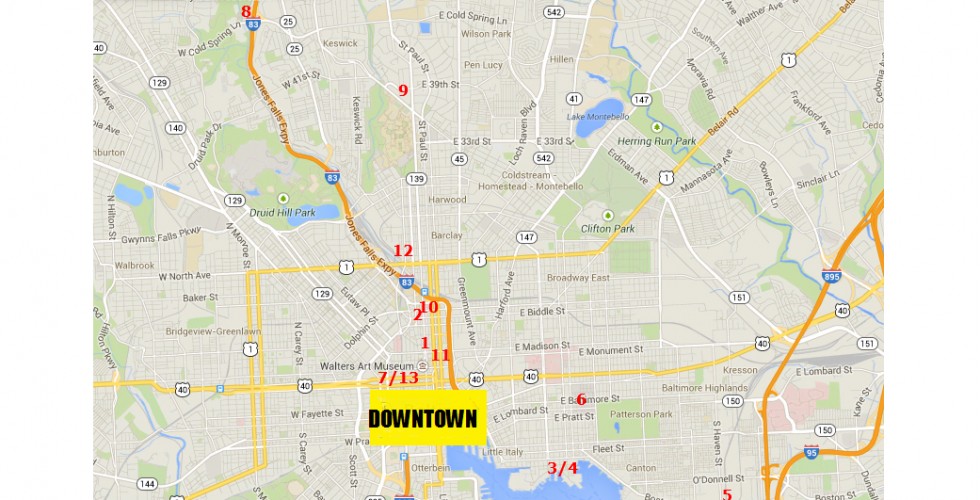 So you’re planning a trip to Baltimore and you’re wondering where to stay. For the vast majority of the city’s visitors who are coming to the convention center or the ballparks or the Inner Harbor a downtown hotel is fine. There are a ton of them to choose from and they’re all about the same. There’s not even any need to write so much as a blog post about them. We can answer all your questions right in the intro:

Should I stay downtown or in Harbor East? It makes no difference at all, it’s a 5 minute walk.

Should I stay near the stadiums, down by Russell Street? No. There’s nothing there but car traffic and gas stations.

Why are some hotels so much more expensive than the others? Because the Four Seasons is a lot nicer than the Holiday Inn. You get what you pay for.

So that settles that. But every once in a while the New York or DC media publishes one of these 36 Hours in Baltimore type pieces geared toward the culturally-minded traveler who’s more interested in the arts and dining/nightlife scene than a convention and a t-shirt with a crab on it. If you want to see the real Baltimore, the Chop’s Baltimore, you’d do well to consider staying outside of downtown.

But where? Google isn’t much help, since it lists 200+ hotels ranging from Edgewood to College Park. And most often it’s really hard to divine what the hotel’s location is actually like just by looking at Google’s maps. Plus all the reviews are just people whining about petty nonsense. As both a Baltimore native and an experienced traveler, the Chop is here to give you the low-down on uptown hotels.

1… Peabody Court Hotel This is probably your best bet. Located right on Mount Vernon Square the location is beautiful and the hotel is very large with lots of rooms. This is one of the nicest and most walkable neighborhoods in the city and is convenient to everything including the free Charm City Circulator bus. It’s also home to one of our favorite bars/restaurants.
The decor here is fancy enough to make the ~ $150 price tag feel like a bargain.

2… Hotel Brexton The Brexton has been recently updated and is very well regarded among locals. Also centrally located in Mount Vernon it’s a historic building with modern decor and attractive specials like a room and dinner for two, and a bottle of wine for $169. With normal rates around $130, it’s a boutique experience at a bargain price.

3… The Admiral Fell Inn No visit to Charm City is complete without a visit to Fell’s Point, but for a distinctly non-touristy experience the Admiral Fell is hard to beat. Located both on the water and on the square this is the perfect jumping off point to explore East Baltimore’s nightlife and restaurants on foot, or the rest of the harbor by water taxi.

4… Celie’s Waterfront Inn Just half a block from the Admiral Fell, Celie’s provides a similar experience in a smaller building. Either of these is a great choice for a couple on an anniversary trip. These are two of the most expensive hotels on this list, but it’s possible to get into either for under $200 including taxes so both are worth considering.

5… Inn at 2920 If the Admiral Fell and Celie’s are perfect for anniversaries, the Inn at 2920 may be a better choice for a younger couple on their first romantic getaway. The rooms are individually decorated and thoroughly modern. It’s more along the lines of a luxury bed and breakfast than a proper hotel, but for about $200 a night you get to meet the owners, who are directly in charge of your customer service experience. Can’t get that at the Hilton. The Canton neighborhood is very nice, and this inn is located very near it’s square and Waterfront Park, but some may not find it entirely convenient to the rest of the city.

6… Blue Door on Baltimore [Street] Another one of your boutique/luxury Bed and breakfast options The Blue Door is in Butcher’s Hill, which can be a charming neighborhood with some great old brownstones in it. It’s got easy access to Patterson Park, but it’s pretty far removed from anything touristy or cultural or nightlife-y. But its secret weapon is parking. If you’re in a car anyway and don’t mind driving you can park on the street free and unregulated here, which you cannot do in other neighborhoods. Add to that that you’ll pay about $50 less a night than the other B&B’s on this list and Blue Door might be a good fit for your anniversary/getaway.

7… The Mount Vernon Hotel If you’ve seen this hotel in search results you may be scratching your head at the low rates and thinking it’s too good to be true. We know fellow merchant seamen who have personally stayed here when traveling through Baltimore and we can tell you that this place really is the best deal in town. It is a bit of a no-frills experience, but it’s location is very central. Being just a block or two north of Downtown proper it’s easily accessible to everything. If budgetary considerations are your primary concern, go ahead and book here for about $60 a night. We may be wrong about this, but we believe this hotel is affiliated somehow with the BIC culinary school, so perhaps staffing some positions with hospitality industry students accounts partially for the low rates.

8… Radisson at Cross Keys If you want a traditional hotel experience, this is it. It’s a Radisson and it’s about $150 a night, but it will feel suburban. Although it’s technically in the city, it’s a 15-30 minute drive from anything you’ll probably want to visit. You’re going to need a car, but there’s plenty of free parking here. It’s sort of convenient to JHU, Hampden, Pimlico, the Cylburn Arbouretum, and Druid Hill Park so if any of these is the focus of your visit stay here.

9… Inn at the Colonnade This hotel is directly adjacent to the JHU campus and convenient to Hampden and the Baltimore Museum of Art. There are a few hidden-gem type restaurants in the immediate area, and Tuscany-Canterbury is a beautiful, peaceful neighborhood that is home to the one and only John Waters. This hotel is a Doubletree by Hilton and comes in around $150 a night. It’s far enough from downtown for peace and quiet but close enough to drive straight down Saint Paul Street.

10… Abacrombie Inn This place is low-key. So low key that we walk by it regularly and usually forget it even exists. It’s right around the corner from the Hotel Brexton and about the same price but not nearly as large or well regarded. The TripAdvisor reviews are uniformly awful and the place was on Hotel Impossible, a TV show whose host was quoted in the Sun as saying it was “the dirtiest hotel I’ve ever seen.” if you’re thinking of staying here just don’t. Pick the Brexton or Peabody Court instead.

11… Rodeway Inn This place has always confused us because it’s a B&B looking brownstone, but it’s managed by a company that’s known more for roadside motels than urban properties. But its Mount Vernon location is pretty choice and if your main purpose is getting out of the room and exploring the city this is a great option for budget travelers not expecting any frills at about $65-70 a night.

12… Motel 6 Another motel anomaly in the middle of the city, this one dates to the time before the interstate system. This stretch of North Ave is technically part of US Route 1 which runs from Maine to Key West, so the place was actually built to handle motor traffic and looks like it. Today it’s in the heart of the Station North Arts District. Again, this is a no-frills, low-price option perhaps best suited to solo travelers, but anyone who stays here will get a unique urban exploration experience that even some downtown hotels are now seeking to replicate.

13… HI Baltimore This isn’t a hotel but a hostel. It’s reputedly a very well-run one too. We know a fellow seaman who stays here regularly and loves it. If you want to stay in a hostel, stay here.