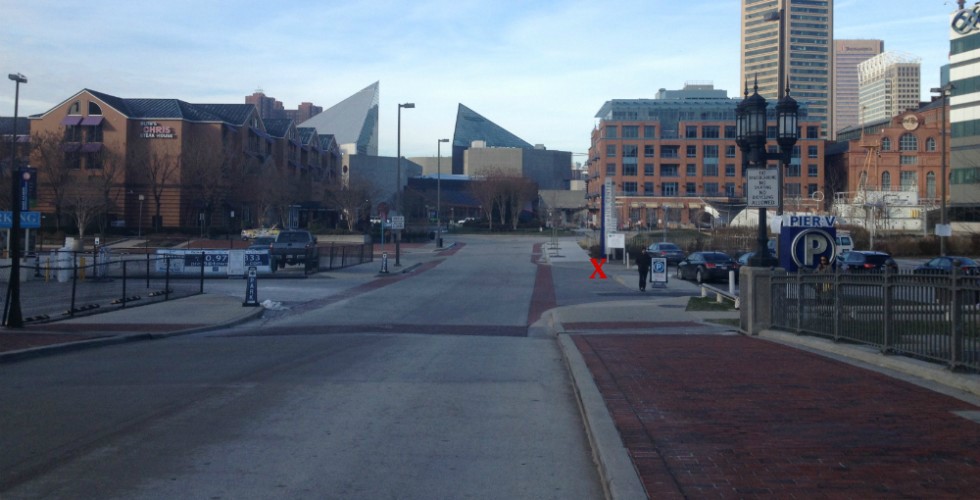 A strange thing just happened to me riding my bike home yesterday. Some guy in a car almost ran me over. Not that there’s anything strange about that, unfortunately. It was his ultimate reasoning for doing it that was utterly baffling to me. Even after arriving at home and thinking about it for a while I’m still not sure if I should be angry, amused, annoyed, or some combination of the three.

I was coming east on Eastern Avenue through Little Italy. I had just come through a green light at President Street, and was continuing to the very end of Eastern Ave where it terminates in front of the Pier V hotel. Being a dead end, the two blocks of Eastern east of President are not very heavily trafficked by cars. I had ‘taken the lane’ as it’s called, and so was riding near the centerline of the road but still decidedly on the right hand side. My main reason in doing this is for maximum visibility but partially to stay that much further from pedestrians as well, since pedestrians are common on these blocks and are often tourists or visitors who are oblivious to their surroundings. This is a route I travel frequently in both directions.

There is a small arching bridge integrated into the road where it crosses the Jones Falls. It was when I reached the top of this bridge that I saw a blue mid-size SUV at the entrance of a parking lot about 40-50 yards ahead on my right, and marked by an X in the above photo. I was very much aware of it, as it was the only piece of vehicle traffic moving either in front of or behind me. So I saw very clearly when the driver pulled up to the road entrance, did a rolling stop, looked in the other direction briefly before pulling out right in front of me. I’d let out a very loud “Whoa!” and made sure to get into his line of sight when he did bring his eyes back to his left, which meant we both came to a stop very near to each other in the middle of the road.

Now, in two years of daily urban cycling I’ve learned well how to pick my battles with drivers. There’s a tremendous difference between someone who just doesn’t see you, someone who should have seen you but didn’t, and someone who sees you and tries to run you down anyway. So I wasn’t very angry with this guy. He should have seen me and didn’t, and while he was entirely negligent and it was a close call I didn’t think very much of it.

I’ve also learned that when picking fights with motorists less is more. Yelling at them is wildly ineffective. Usually a dirty look gets the point across. Often I make it a point not to speak unless spoken to first, as was the case here. I gave the guy a pointed look, and started pedaling again. That’s when he laid down a prolonged blast of his horn. A kind of parting shot as he began driving away.

Of course I turned around and caught up to him immediately. Did he think I wouldn’t? Couldn’t? ‘Who do you think you’re honking at?’ I asked him, his window down by now. ‘You have to stop there. It was you who pulled out in front of me.’ And here’s where it gets bizarre. What do you think he said to me? He said :

“You were going way too fast.”

Now, I know exactly how fast I ride around Baltimore. On average it’s about 13 mph. Running downhill on a street like Guilford or Saint Paul I might get up to around 19-20 mph. I know this from months of using the Map My Ride iPhone app. Coming down the back of that small bridge, I might have gone as high as 20 mph. That’s pretty fast, but it’s not Olympic cyclist fast. I only have one gear, after all. At any rate, it’s certainly not faster than a oncoming car in my position would have been coming.

Our conversation devolved pretty quickly from there. It was obvious that this guy was an oblivious, entitled yuppie saying things like ‘I work here, so I drive here every day’ and ‘I’m going to report you for speeding.’ The smarminess and entitlement and holier-than-thou blamelessness was really more than I could handle. And as I say, I didn’t really want to pick a fight with the guy to begin with. ‘Yeah, report me for speeding asshole. See where that gets you. I pedaled off, for good this time.

Half a block down there was a hotel valet who saw the whole thing. He stepped out into the road as I approached: ‘What’d he say?’ He asked me. ‘He accused me of speeding.’ I said. We both laughed out loud.

The whole thing really drove home a point for me though. If you’re on a bike, you just can’t fucking win. People will complain forever that you’re too slow and should use back streets. Then when you find a small stretch of street without too many cars, come through a green light, stay in your lane, pedal near the speed limit and do everything right motorists will still nearly run you over in their own obliviousness. When asked why they almost ran over you, instead of saying ‘My bad, sorry.’ They will say the dumbest, most illogical shit they can think of to avoid accepting responsibility.

Sadly, being a skilled cyclist and completely in the right is still no match for a steel cocoon and a yuppie sense of entitlement.