If we’re being honest, we’ve been suffering a bit of charity fatigue lately. It’s gotten so that we can’t check our email without hearing about some big-time weekend charity event for this or that cause. We can’t log onto the internet without someone asking us to kickstart this or indiegogo that. Want to watch the MLB postseason? It’s all wounded warrior this and text 69696 to 54321 to donate $10. Want to listen to the radio? Too bad, it’s pledge drive time.

As we’ve said before the kind of philanthropy we like is the kind that doesn’t even feel like charity, and that’s exactly what tomorrow’s Kill Yr 90′s Night at Golden West is. The show features 7 bands for $10, and includes some of the Chop’s local favorites like Landspeedrecord! Balkan Falcon and Sal Bando. Proceeds benefit the Hampden Family Center. 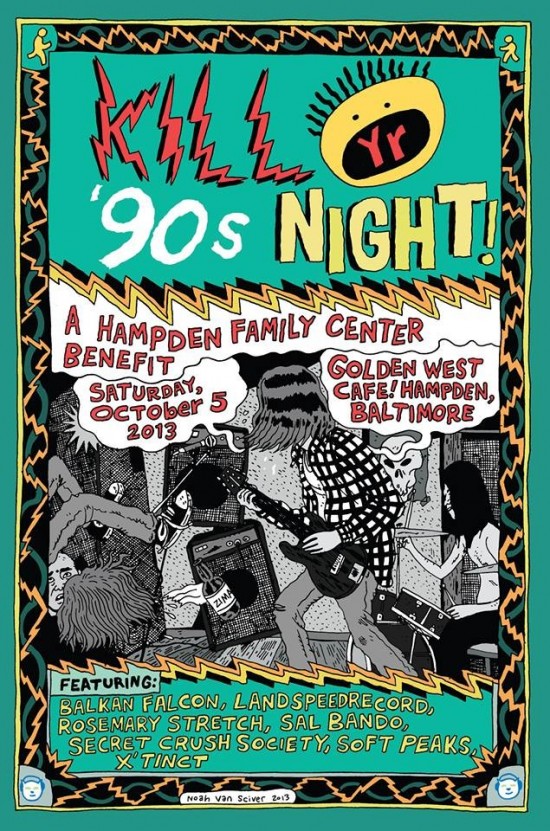 So what exactly is Kill Yr 90′s Night, anyway? Well, way back when the good people of Atomic Books used to produce I Hate the 80′s Night. For those of us old enough to actually remember the 90′s, a pronounced distaste for the music and culture of the 1980′s was a badge of honor among the so-called Alternative Nation. After all, ‘alternative’ music was called that because bands like Sonic Youth and Nirvana were, at least at some level, meant to be a different choice for people who liked rock music but felt it had strayed too far down the path of Motley Crue, Def Leppard, etc.

Also the jig was finally up on Reaganomics and the Cold War and much like after Bush no one really wanted to be reminded that the whole country had been fucked for the last decade. So things like Miami Vice and the Pet Shop Boys were most unwelcome reminders of a time we’d have rather forgotten.

So why hate the 90′s? Was it really that bad? Probably not. But do you really want to go back to a time when people were losing their shit over Britpop and wearing Doc Martens everywhere and using AOL messenger? Of course you don’t.

So the 90′s must be actively hated upon, otherwise we head back down the road of buying tapes and watching Friends and hanging out at Orpheus.