Our first exposure to the work of Baltimore artist Erin Fitzpatrick was almost 4 years ago, when we attended her Baltimore Portrait opening at UB.

It was an impressive show and we were certainly won over as a fan, but since then we’ve been mainly limited to keeping up with her work through her website fitzbomb.com. Of course, when it comes to something like fine arts there’s a whole world of difference between seeing an image of something online and seeing actual pieces hanging in a gallery, so we’re very excited for tonight’s opening at the Metro, simply called Erin Fitzpatrick: Portraits, which runs through October 19. 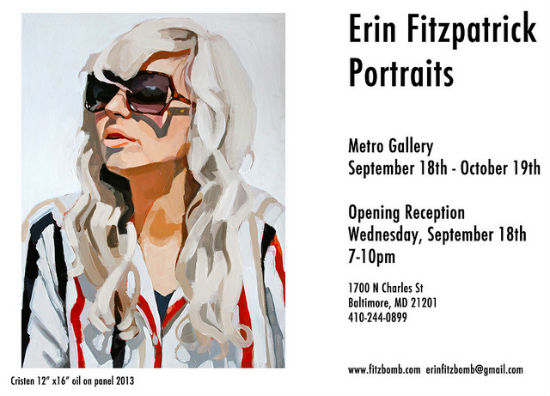 While Fitzpatrick has been ‘collecting’ the portraits of Baltimoreans since 2008 and has more than 150 to her credit, this exhibit will focus exclusively on recent works. A quick look back at some older works reveals the artist’s progress at a glance.

As she told the Chop recently ” “This show represents a transition into the next phase of my portraits. I’m not as concerned with the specific identity of the subject as I was in the past; in many of the paintings heads are turned, eyes are covered with sunglasses, and figures are nearly dressed in costume.”

It’s an interesting distinction. And we should know. After all quasi-anonymity is a daily concern here at ye olde Baltimore Chop Blog. Looking a subject squarely in the eye for a portrait, and even going so far to attach a full name to the work can lead the viewer to speculate quite a bit about that subject’s inner life. To make even slight changes like adding some oversized sunglasses and dropping the full name in favor of a title like ‘girl with hat’ has a way of saying to the viewer ‘Yeah, I have a story, but I’m not telling you just yet.’

Fitzpatrick has a story too, although for now she’s still in the middle of it. As she went on to say in a recent chat “Moving forward I want to use the figure more and more as a vessel for the exploration of the formal qualities of painting, line, shape, color, composition, etc. It’s all part of my ultimate daydream to be known as a great painter and not just a portrait artist. Ha, although maybe that distinction isn’t so important outside of my own head.”

Tonight begins another chapter in that story from 7-10 pm, complete with food from B Bistro and music from DJ Adam Gonzo. See you there.