When we visited Austin recently we were a little bit surprised at a lot of things. We knew we should expect food trucks, but we didn’t know we should expect whole trailer parks full of food trucks. We knew people wore stetsons and cowboy boots, but they wear them like to the grocery store. And we knew there was a lot of live music to be heard, but we didn’t fully realize that that meant 24 hours a day everywhere.

Whether it’s punk and indie stuff, country/western, rock and roll, singer/songwriters or experimental college stuff, there really is music everywhere in Austin. We got around to quite a few different places and found that some of them are more dedicated to one particular genre while others will alternate sounds from night to night. They all had one refreshing feature in common though: No Cover Charge. 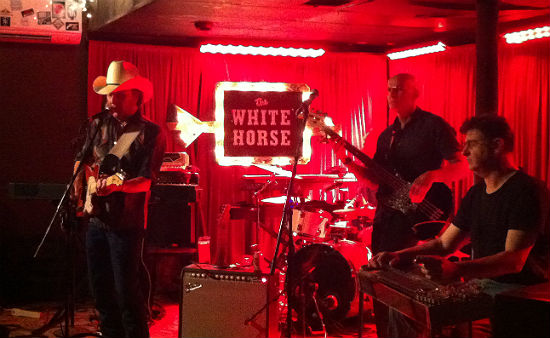 Looking back on it, we probably didn’t pay a single cover during our whole 5 day trip and we’ve been musing on why that is. Partially we think it has to do with Austin featuring so many live-music bars and clubs all very close together. Places really want to encourage people to just wander in and stay awhile, and paying a cover certainly discourages the casual bargoer who’s more interested in having a drink than hearing a tune.

If there’s an oversupply of bars, there’s also an oversupply of talented bands. Most every act we happened to catch on our visit sounded very tuned-up, polished and professional. Why pay to hear a band when there’s someone just as good playing next door for free? It would take a pretty special act to command a cover in any of the places we visited.

But mostly bars don’t charge a cover because it’s not at all necessary. Austin’s live music culture is quite a bit different from ours here in Baltimore, and one of those differences is passing the hat. Bands playing for tips is commonplace, and the culture is such that audiences have become very used to throwing a few bucks in the tip jar or literally into a hat that’s passed around.

For bargoers it’s a pretty good system: you only pay for what music you actually watch, and even if you watch several bands or move from one place to another and tip musicians in each you’re still not out more than the $8-10 of a typical cover charge. If you really don’t like a band you’re not stuck having paid the door: you can walk out back for a beer (all the bars have wonderfully big backyards) or seek out another place.

For bands it works just as well. With audiences who are as used to tipping bands as their bartenders, musicians make as much or more than they might after the house and promoter get cuts. They’re also not subject to the whims of promoters with questionable division schemes on slow nights.

And for the house it’s a no-brainer. Book talent and don’t pay for it, and allow people to wander in freely. We understand why this system isn’t in place in Baltimore, and with the way our bars and crowds are it probably wouldn’t work even as an experiment. We sort of wish it would though. If anything, it would get us in the door and checking out even more live music than we already do.