But it probably should be. After all, it’s 2013- the perfect nexus of foodieism, craft brewing, and lazy journalism. Any asshole with a Facebook page can unilaterally declare a day to be Boston Cream Pie Day or National Greek Yogurt Day. In fact, just the title of this blog post alone is probably going to get indexed in Google and get people to start repeating that August is National Hard Cider Month.

But we digress. What we mean to say is that for us, August is our personal hard cider month. We’re calling for cider at the bar this month more than ever, and really enjoying it. Partially, this is a rebuke against the season creep of Fall beers. We’ve about had our fill of Boh for the Summer but it’s still too damn early for pumpkin flavored things.

Partially, it’s because Apples are just about in season now. Another couple weeks and they’ll be in full season, but we’re already starting to see them occupy more and more space at farmers’ market stands. There’s never a bad time for cider drinking, really, but August and September are just about perfect. 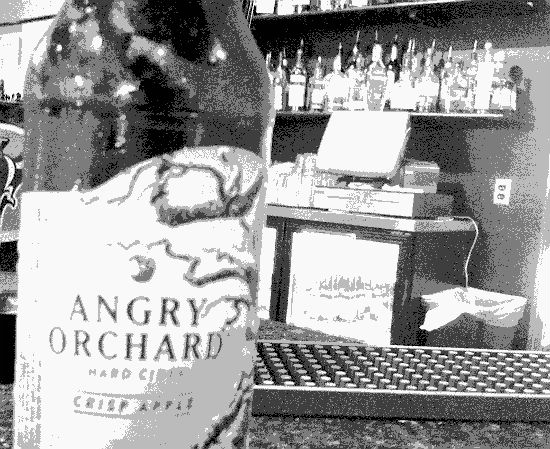 But mostly it’s because cider is becoming ridiculously easy to find. It used to be that if you asked for it in a bar they may or may not have a superannuated six-pack of Woodchuck way down in the bottom of the cooler, sitting in like an inch of water, with the label peeling off of it. Now it seems that everywhere we go there’s at least one decent option in a bottle, and several places around town are increasingly featuring cider on draft.

This isn’t just our imagination either. a Google news search for hard cider will turn up pages and pages of recent stories about how cider consumption has tripled since 2007, and increased 50% just last year. There are now more than 200 cideries in the US, and no shortage of stories about brave young entrepreneurs who cast aside their cubicles to pursue their dreams of crafting artisan cider on a shoestring budget and yadda yadda yadda.

But clearing the way for those hearty apple visionaries are giant beer companies like the makers of Sam Adams and Belgian label Stella Artois, which is owned by Anheuser-Busch InBev. Both have recently introduced cider lines to the US Market, with Stella’s being especially precious- spelled Cidre and made from “hand picked apples.” (Really. For fuck’s sake.)

Yes Choppers, sip on ye cider while ye may, because we’re about to enter a brave new world of cider-artisan-cocktails, tasting flights, meal-pairing know-it-alls, horrible ginger-citrus-honeydew-elderflower-barrel-aged ciders and the worst… bartenders who serve it in wine glasses. Mark our words: this trend is about to jump the shark soon, and linger on and on forever afterward.

We say grab a Woodchuck this month and enjoy it in peace while you can- before it becomes the PBR of the cider world.