It was with great dismay that we came back to town to hear news of the closing of Dionysus. Dio was perhaps our favorite Mount Vernon bar, not too much of anything but just enough of everything. Let the beer snobs go to Brewers’ and the clubby people go to Red Maple and the drunks go to Dougherty’s. Dionysus was the kind of place that was strictly for locals looking to relax. We’re still upset that it’s gone.

But like ye olde bible says there is a time to tear down and a time to build, so we were excited to learn that another recently closed Mount Vernon institution would be replaced with a new establishment. 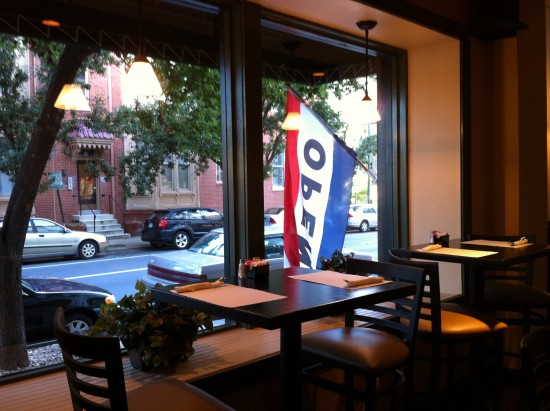 Tavern on the Hill is now open at 900 Cathedral St. at the site of the former Howard’s of Mount Vernon. As the name would suggest, it’s a little more bar-centric than Howard’s was, which to our mind is a welcome change.

There’s no getting around the fact that the place is first and foremost a restaurant, and it gives that peculiar sensation of being a restaurant bar, with little to no separation between the dining room and the bar area. With the layout not having changed, it is still possible to sit at a bar stool and look over your shoulder clear into the kitchen area.

Speaking of the kitchen, they’re cranking out a menu that’s not terribly different from Howard’s, and about what you’d expect for casual dining; burgers, sandwiches, salads, pasta and the like. The two most interesting points to note are that breakfast is available all day, and that the kitchen stays open late, offering a lite fare menu to bar patrons after dinner service has concluded.

The place is definitely going through some of the hiccups that new restaurants go through, and we’re not going to detail them here except to say that the men’s room toilet seat is being held together by masking tape. Come on now… that’s unacceptable anywhere, but especially in a recently renovated place that’s been open less than a month. How hard is it to go to a hardware store and spend $19.99 on a seat?

Despite some flaws though, Tavern on the Hill is what we want it to be: a comfortable place to sit around and drink beer. The staff is friendly and there’s a good size TV nicely mounted at the end of the bar for watching the O’s or Ravens. Plus much like Howard’s they offer free wifi and that great secluded courtyard in the back. We’ll be going back again, and you should stop by too.