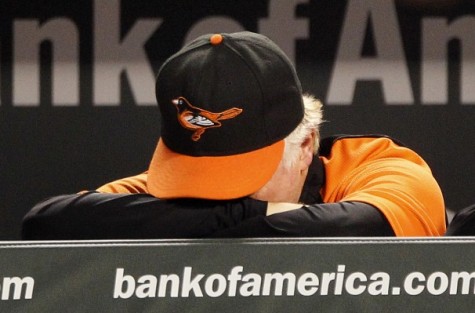 If Buck seems tired it’s because this schedule is running us all ragged.(Photo: Patrick Semansky/AP)

One of the most common phrases bandied about the Orioles’ clubhouse in the last few years is the somewhat curious term ‘Sleep Fast.’ It was first introduced to the Birdland lexicon by Buck Showalter when he arrived in 2011. Buck uses the phrase often in postgame interviews after night games and before day games, and it’s been picked up and repeated often by almost everyone who covers the Orioles, especially TV broadcasters Jim Hunter and Gary Thorne.

Originally it had a lot of people slightly confused, but we recognized its meaning right away as it’s a saying we hear aboard ships all the time. Life at sea is all about routine, and often that routine involves two sea watches and several hours of overtime, leaving little time for a full night’s sleep. If all hands are called during the time a sailor usually sleeps, it’s a sure bet he’s going to end up being awake for 20 hours and then having maybe 2 hours off before his next watch. And some joker is absolutely certain to remind him how tired he is by saying ‘sleep fast.’

Maybe it’s because we are predisposed to hate that phrase but in 2013 we noticed it seems to be in use all the time on Oriole broadcasts. It seems like every other day the team is sleeping fast for some reason or another. So we decided to break down the 2013 season schedule and this is what we found:

We’re not sure how this compares to previous years, but Jesus! 66 Games that don’t start in the 7:00 hour seems awfully high to us. It’s more than 1/3 of the season. This includes both home and road openers and a handful of games on holidays, but it also includes some getaway games that aren’t true ‘getaways’ with one team not going anywhere or flights that are less than cross-continental. It also reflects 15 Saturday day games, which is a growing trend that we do not approve at all. Day games are fine on Sundays but sitting in the sun all Summer really sucks.

We’re not sure if this year’s scheduling is just a bit of bad luck on the part of the Orioles, or if this is part of a larger trend across the Major Leagues in order to avoid double headers and maximize TV rights. With the team in the early part of an eight day road trip to San Diego, San Francisco and Arizona starting night games late and getaway games at 3:40 and 4:05, any fans who want to keep up are going to have to sleep fast.