Welp, it’s Summer. It’s the Summerest part of Summer; Fourth of July week. It’s hot. Everything in the world is sticky and stinky and miserable and disgusting. It rains every day now for some stupid reason and then the sun heats up the rain in the ground and you can’t breathe and everyone gets steamed to death.

It’s the time of year when you shower 3 times a day and step out of the shower sweaty. People post pictures of their dashboard thermometers online and say things like ‘It’s not the heat it’s the HUMIDITY!” It’s enough to drive a man crazy, and sometimes the only escape is to the cool embrace of the barstool and a frosted mug (or 3) of cheap watery Boh.

And it’s after those three Bohs that with a little luck we encounter one of the most peculiar and practical traditions of barroom culture: ice in the urinals. 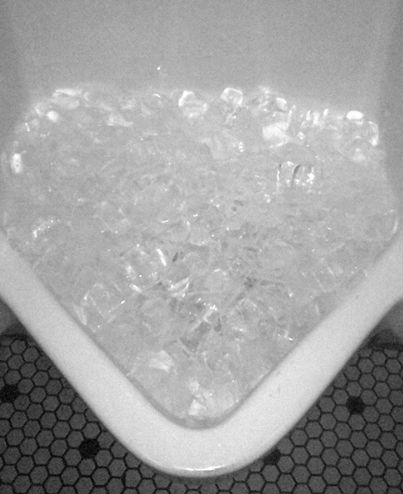 Loading up the pissers with ice cubes is definitely a sure sign that you’re in a real, legitimate dive bar and not a faux-dive or dive-themed bar. No one knows who that clever barman was who first heaved a bucket of ice into the trough or when he did it, but since then this little trick has been a perennial favorite of bar owners who know their plumbing is shitty but just can’t afford or be bothered to fix it. It’s a great irony that this humble workingman’s solution to bathroom odor actually works more effectively than most commercial janitorial supplies found in more respectable establishments.

That is, after all, the purpose of the icy urinal. It’s a DIY deodorizer. Keeping urine freezing cold goes a long way toward neutralizing the smell and not allowing it to rise in the atmosphere, especially in cheap corner bars which usually haven’t got the best air conditioning. It’s been the Chop’s experience that when bars use urinal cakes in the dog days of Summer, the whole restroom just ends up smelling like piss-cakes when guys fail to flush regularly.

And therein lies the twofold genius of ice: as it melts, it slowly runs through the urinal’s integral trap providing a kind of time-released flush action and preventing a pool of concentrated piss from forming in the fixture when it’s used repeatedly without flushing, or when it’s too broken to flush properly.

So the next time you unzip and find yourself facing a pile of ice cubes, you’ll know why they’re there and what they’re doing. And by the way… don’t ever attempt to flush a urinal that’s full of ice, because if it is working properly it may overflow onto your shoes.