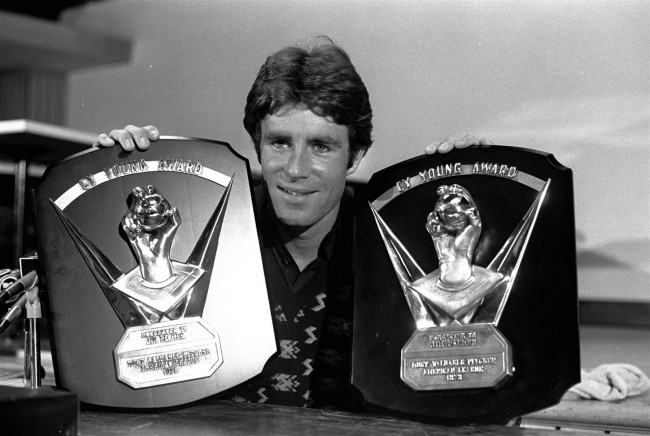 If there’s one thing the Chop loves above all else, it’s the Old Ballgame. It’s almost scandalous just how much of our day is occupied by the Pastime. When we’re not watching the O’s, we’re checking in on the Nationals or on the lookout for a random Cubs or Braves game. We like watching baseball so much that we’ll even subject our poor ears to the awful announcing on ESPN several times a week.

And if we’re not watching baseball, then we can probably be found reading about it. Whether it’s blogs like The Loss Column and Bugs and Cranks or dusty old books from the glory days of the 60′s and 70′s, we love a good baseball story.

And with that in mind we’re happy to announce that submissions are now open for the 2013 Jim Palmer Baseball Writing Prize.

Now don’t get too excited. If you win Palmer isn’t going to show up at your house with a giant stack of pancakes and regale you with stories about beating Sandy Koufax in the ’66 Series. The prize is merely named in his honor by Cobalt Magazine.

Founded in the Fall of 2011 right here in Baltimore, Cobalt is a serious quarterly literary journal that publishes fiction, poetry, essays and interviews by local, national and even international authors both online and in print. In addition editor Andrew Keating also sponsors a number of contests, the Palmer Prize being one currently open for publication in July 2013. Here are the guidelines from their submissions page: 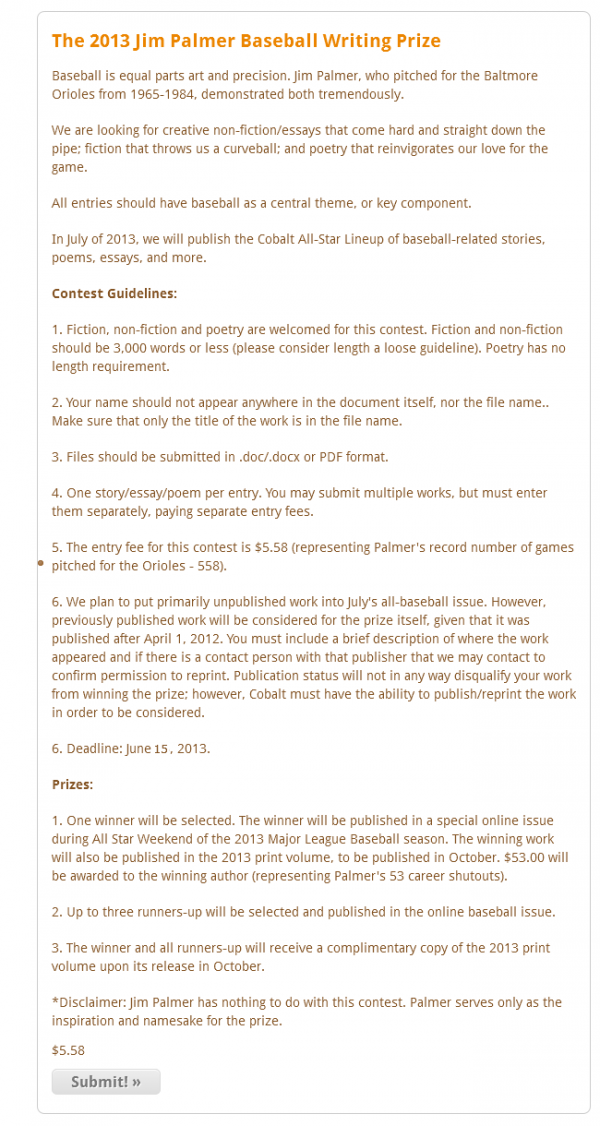 We realize that $53 and a copy of the July issue may not quite be enough to retire on, but if nothing else the contest is one hell of a résumé booster. Just think of it, even if you don’t win you could spend the rest of your life being introduced at cocktail parties as ‘runner up to the Jim Palmer Baseball Writing Prize.” And if that doesn’t impress ‘em then nothing will.

Anyway, we’ll be out at the park for bargain night tonight, sitting upstairs behind the plate cracking peanuts and cracking wise, taking in the view of the skyline and the game on the field. Who knows? We might even be inspired to write something down.

It should be noted that while the Cobalt website lists the contest deadline as June 25 in two separate places, Andrew Keating has this weekend confirmed to this blog that the deadline is June 15. But even so he has later re-confirmed that the 6/15 deadline was for another contest, and the Palmer Prize’s deadline actually is 6/25. Sorry for the confustion.