Baltimore can be a strange place on a long holiday weekend. The normal pace of city life pauses. People quit showing up to work if they possibly can and head out to the beach or to family reunions or weddings or whatever it is people do when they’re not in Baltimore.

And in recent years Memorial Day weekend has meant a full scale Walking Dead-style metalhead invasion as Maryland Death Fest has stretched itself to a full four days (not including pre-parties and whatnot) and become the largest metal festival in the country, if not the world. 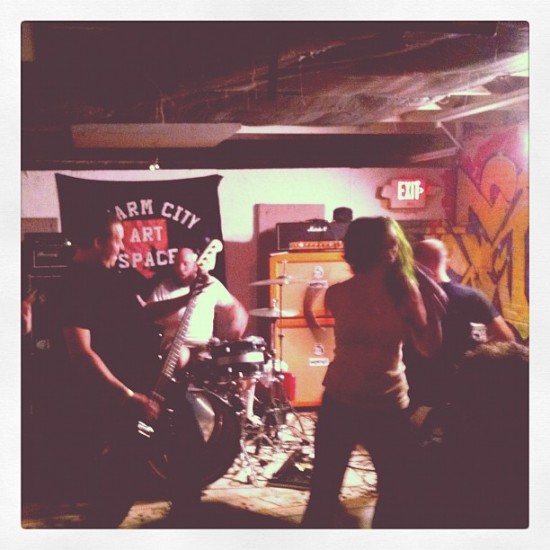 War on Women open for Lemuria tonight at Metro Gallery.

Tonight though, things return to normal. If you’re a Baltimore area kid who likes punk and or indie rock tonight is finally your chance to crawl out from under your rock and head down to the Metro Gallery. There won’t be any corpse paint there, nor double bass nor scary guys with facial tattoos who look like this.

Lemuria is coming back to town tonight, and if you don’t like Lemuria well then there’s just something wrong with you, Jack. With lyrics that are poignant, personal and just twee enough paired with musicianship and harmonizing on an expert level, Lemuria is that rare band that you can fall in love with at a very young age, and keep coming back to with equal devotion well into your thirties. (Trust us, we ought to know!)

And good news for you if you haven’t, or if like us you’re better at seeing live music than you are at buying records: Lemuria has recently released a full length collection of all their scattered older work, splits, seven inches and whatnot. Pick it up at tonight’s show and listen to it all at once and give the Arrested Development episodes a break why don’t you?

Two of Charm City’s best bands going today share the bill. Sick Sick Birds are as sick as ever, and War on Women probably get our vote as the most underrated band in Baltimore.

They’re kind of easy to overlook. With only a six-song release under their belt, they’re the kind of band that plays regularly enough, but always seems to be playing on a random weeknight with a band you’ve never heard of and another band you’ve seen too many times already. We’ll admit that we slept on them for a long while as well, but once we got a taste of their aggressive, rebellious brand of hardcore punk we were hooked, and they’re a band we’ll go out of our way to see from now on.