So, your Chop might just be the only person in America who is of this opinion, but if you ask us there aren’t any serious scandals going on in Washington right now. Sure, there are “scandals” but they really amount to little more than business as usual. We fail to see how Benghazi, the IRS debacle, or the AP subpoenas really amount to much. Individually, they’re decidedly inconsequential, and even taken together they’re just one giant yawn.

Of course, the GOP doesn’t see it that way. They see things differently. The first of these supposed scandals to break was Benghazi, which happened in September of last year, right before the 2012 election. Cranky old coot John McCain manufactured the Benghazi scandal almost single-handedly because he’s still bitter about not being president and has a personal vendetta against Barack Obama. He saw a national security crisis as the perfect chance to play Monday morning quarterback and has broken out a few gems from the Birther playbook asking the administration to prove a negative on several occasions.

If you ask us, his military record notwithstanding, John McCain has always been given way too much credibility on military and security issues and uses his powerful committee assignments to swing around his right wing ideology like a big, fat prick. It’s long past time he retired.

After the entire GOP started looking at Benghazi through the McCain lens, everything after it began to look a lot different. It reminds us of something we once saw on the Internet. 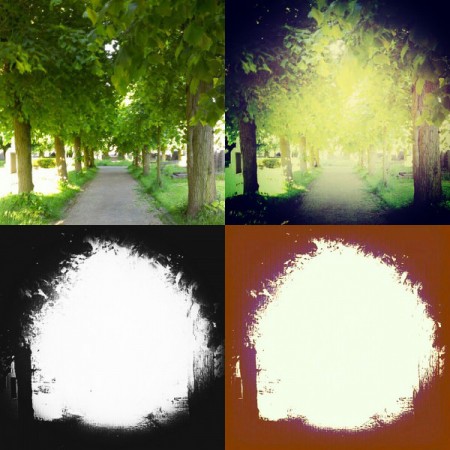 The above image is drawn from Appelogen and illustrates what happens when you apply multiple Instagram filters to the same photo. With only one filter in place, the trees look quite realistic. One’s not even sure if the picture’s been manipulated at all. With several filters in place, a distinctly new view takes shape. The trees are still trees though, and most of the facts and features are still discernable. It’s still a picture of two rows of trees and a sidewalk on a spring day.

Toward the end of the experiment though, it’s impossible to discern any sort of reality in this photo. It’s only light and darkness, it’s all black and white. Looking at the news through so many partisan filters is precisely how we end up with pundits wailing that this is the worst scandal in American history and is worse than Watergate and Iran Contra and Monica Lewinsky all together.

It could be that these “scandals” are diminishing in importance right before our very eyes as news coverage is now dominated by the Oklahoma tornado. Of course, GOP Insta-filter vision doesn’t just apply to Obama directly. No, the Republicans see everything through their ideological tunnel vision, and less than 24 hours after the storm hit here’s Oklahoma’s own senator Tom Coburn shamefully demanding budget cuts to finance relief efforts while people are literally still being pulled from the wreckage in his state.

Oklahoma’s other senator, James Inhofe, recently voted against a relief package for Hurricane Sandy victims, and then actually had the huevos to go on MSNBC yesterday morning and declare that this disaster is “totally different.” It’s not, of course. It’s exactly the same. The only difference is going to be in the way Inhofe votes. Offsets or no, we’ve got a good feeling he’ll be voting yes on any relief package that hits the senate floor.

Fortunately, FEMA’s not broke, and House appropriations chair Hal Rogers has more sense. For their part, John Boehner and Paul Ryan are smart enough to keep their mouths shut for the time being and so far have refused to take a position.

We only hope that once the damage begins to be cleaned up, the Republican blinders will also be lifted, and Oklahoma’s senators will be exposed as the cold-blooded, stubborn, asshole ideologues that they are.

Want to Talk about it? Baltimore’s Drinking Liberally holds court tonight at Liam Flynn’s Ale House and is free and open to all. 8-11p.