Well, we did it. After years of daydreaming about it in a nebulous, faraway manner we’ve finally gone ahead and put down a deposit for Orioles season tickets.

Yesterday was, of course, the deadline to drop deposits and still be eligible for ALCS and World Series series tickets, and that was the impetus to get us to finally write a check and put our money where our mouth is. Now that it’s done though, we realize we should have done it a long time ago.

It’s been a given that we’re going to attend at least 13 games every season, so committing to a mini plan isn’t a giant step. In fact the only thing that’s been holding us back has been our unpredictable travel schedule. We often miss whole months of the baseball season at a time, but it wasn’t until yesterday that we realized this wasn’t really a problem. 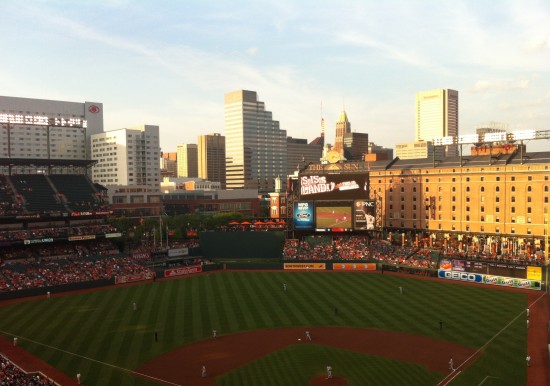 Honestly, we’re very used to getting screwed by the ballclub in the form of per ticket fees, will call fees, Ticketmaster fees, and a shell game of ticket availability. Once we read over the details though, we realized just how good they treat their season ticket holders:

No fees. An obvious benefit. Fees for 13 individual games can run over $60 a season for a pair of tickets.

Discounted prices. We’re also saving a few bucks per seat per game, which adds up to another sixty bucks or so.

Free exchange. The O’s offer the ability to exchange tickets up to 3 hours before game time. Even if we don’t go to any games in June and July, we can swap them out for August and September.

Replay dates. Even if we screw around and forget to exchange tickets, we can still trade them in later for a $1 fee.

Stubhub. Straight up selling tickets is incredibly easy. No dealing with shady characters on Craigslist or going to the post office to mail them- you can sell them with a click of the mouse right from your Orioles account. Pretty sweet.

Early access to the ballpark.Season ticket holders enter through a dedicated gate that opens 30 minutes early. Comes in handy for when you want to snag those sweeeet barstool seats in centerfield.

Express ticket window. Skip standing in line with the rabble and make exchanges or purchases quickly on game days.

Email tickets. Sell or give away tickets to your friends via email. Welcome to the future.

Get your name on the scoreboard for free. Three times. They’ll also send the Oriole bird up to your seat. Which we guess is neat if you have kids or something.

Behind the Scenes tours A chance to stroll through the clubhouse and pressbox for free? Don’t mind if we do.

Other free stuff. Free admission to area museums like the Babe Ruth House, Sports legends museum and more, as well as free tickets to minor league and Spring Training games.

So yeah, we’re sold on the idea of buying season tickets and already looking forward to 2013. All that’s left to do is pick our seats, pick our games, and of course bring home this year’s World Series trophy.