Last week over on the Baltimore Brew local architect Klaus Philipsen offered a defense of the Mechanic Theater and made the case for its historic preservation.

This blog, however, remains unconvinced and today we say that that ugly, useless monstrosity should be torn down immediately. It is an architectural abortion; an eyesore and an impediment to a liveable downtown. We suspect that Mr. Philipsen has been too long hunched over drawings or enamored of picture books and hasn’t spent nearly enough time on the street in this city. What he and the few other architects and preservationists who agree with him fail to realize is this:

Regular folks do not give a flying fuck about architecture.

They especially couldn’t care less about schools of design or architecture for its own sake. Regular people like being in and around buildings that look nice and function well and that’s the extent of it. The Mechanic does neither, which is why virtually all non-architects hate it and would love to see it gone. 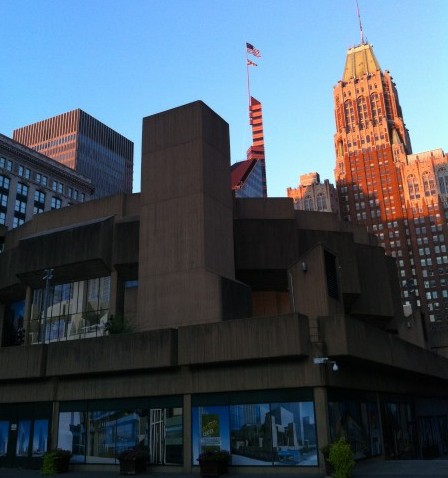 Philipsen says that those people “don’t get” the historic context of Brutalist architecture. What he doesn’t get is that people understand it just fine and that we simply do not care. A handful of smarty-pants architects who spent their careers designing buildings more for their own portfolios than for their clients or tenants doesn’t interest the man on the street, and if all the Brutalist buildings in the world crumbled to dust it would be no great loss.

He goes on to argue that if the building is razed now that decision may be regretted later, but we argue the exact opposite; if the building’s owners miss this chance to tear it down now, they, and we as a city will be stuck with this awful building for decades to come.

It’s very easy and convenient for Philipsen to advocate for the theater’s preservation since he’s not the one who has to own and manage the damned thing. He would have the city dictate what the property owner can and can’t do with their building so he can… what? Give a little self-satisfied sigh every time he stops at that red light?

The substantial cost of keeping the theater is something that Philipsen does acknowledge, but he doesn’t offer any solution to the problem and doesn’t seem to mind spending Arrow Parking’s money at all. He damn sure doesn’t offer to pay for the preservation himself. The last thing this city needs to do is hand out more tax credits to big moneyed corporations, especially ones that aren’t even asking for them.

It’s not that we’re arguing against historic preservation here- it’s that this hunk of shit building is not at all historic. Compared to most other buildings in the city it’s practically brand new. Nothing of any historical importance or cultural significance ever happened there. What’s the best you can say for it? That one time Carol Channing came and sang Hello Dolly in front of a bunch of swells? Who cares???

The sooner this city is rid of this awful pile of concrete the sooner we can begin to embrace and enjoy a more livable downtown, and the sooner Klaus Philipsen can butt out of other people’s business and get back to his drawing board.