This blog has been somewhat critical of food trucks in the past. In fact, as much as we like to cook and eat, we’re not keen on foodie culture as a whole.

That’s still true. We still think that the food truck should belong to its working class provenance. Its modern reinvention by people too concerned with cute logos and novelty cuisine may play well with trend chasers and the downtown lunch set, but speaking as an actual working class man with a blue collar job it makes us quite uncomfortable. As we’ve said before, we might love food trucks if they actually came to where we are and were willing to hit the road longer than a 4 hour lunch shift. The main reason we’ve never eaten from a food truck until now is because we rarely see them in operation, especially when we’re hungry. 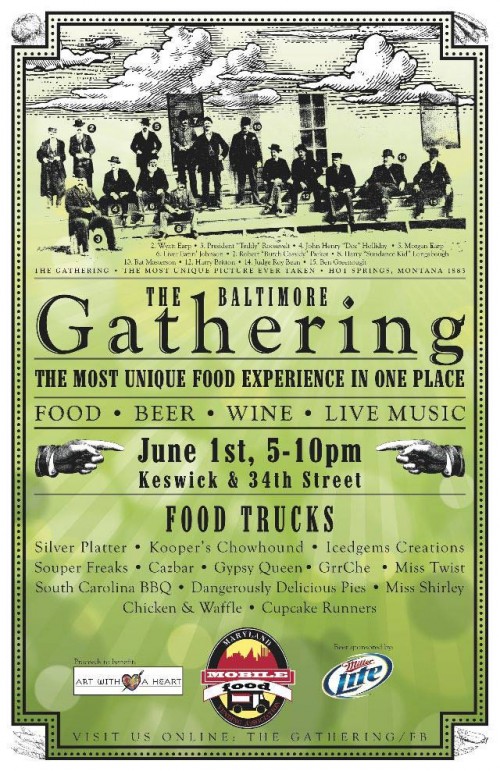 Today though, it’s going to be pretty hard for us to miss them. The Gathering, a semi-regular rally of Baltimore area food trucks will set up shop at the Castle on Keswick in Hampden tonight, and we’re going to go check it out. We’ll probably even (gasp!) eat a meal.

You see, the Republican lives so close to the castle that we’d pretty much be walking directly through the Gathering to get to her house anyway. At dinner time. Before we go out drinking. It’s almost as if the food trucks of Charm City have given us a personal engraved invitation.

When we told the Republican about it, she said “What the fuck is the Gathering?” which is part of the reason we like her so much. After we explained it, we had to explain that Yes. People actually get into their cars and drive them to the food trucks. No. It doesn’t make any sense to us either.

So we’re going to the Gathering tonight. We’re going to put their food where our mouth is, and from this point we’ll either double down on our cheap smugness, or eat a lot of crow. Probably crow in a waffle cone with an Old Bay remoulade, served from a bright glossy truck.