A couple of years ago we wrote our first post about going to a roller derby bout. We were pretty happy with how it turned out, and it was probably the most popular post of 2010.

Problem is, we kind of said everything we know about roller derby right there. It can be kind of tough to write about as a casual observer. But it’s still fun to watch and we’re going to go tomorrow because it’s a nice date-type activity. For the purposes of making a blog, we’d really like to be able to churn out the kind of top-notch copy you’ll find on the CCRG website:

“The interleague season kicks into high gear as Female Trouble makes its 2012 debut with a showdown against a burgeoning Maryland league, the Salisbury Roller Girls. Female Trouble is primed for a winning season due to their extensive roster of utilitarian players and long-time veterans. However, the upstarts from the heart of the Eastern Shore are looking to make their mark on the national roller derby stage by giving Female Trouble a fight to the finish. 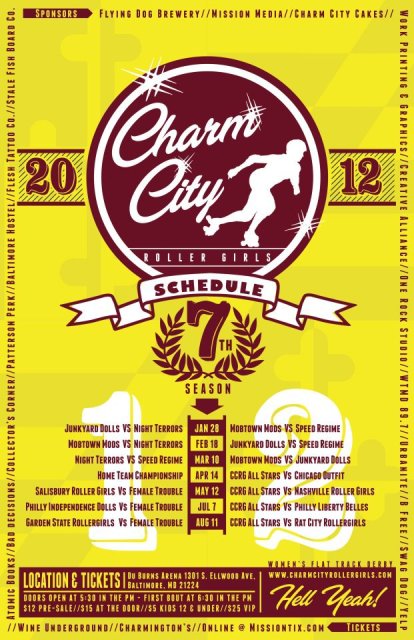 CCRG's May bout is tomorrow at Du Burns Arena.

Some things never change too much. In that first post, we mentioned wanting to go see Vivian Girls after the bout. In a subsequent roller derby post we talked about the phenomenon of Awesome Saturday, how shows and events all seem to pile up on a particular Saturday or the month. Last Saturday there was a hell of a lot going on, and tomorrow also features two shows we want to give a shout-out to.

The first is down at Sonar and features locals Big Mouth and quasi-locals Diamond. This show is worth seeing if for no other reason than these two bands both sound like nothing else that’s being played today. And we mean that in a good way. They definitely don’t sound like each other, which has been a pet peeve of ours lately: booking 3-4 bands on a show that all sound exactly the same. If you do that, stop it!

The other is a benefit for Ride for the Feast and features Paper Dragons, South Carey, The Skipjack, and Hey Hon Let’s Go! at the Charm City Art Space. That’s such a Baltimore-overdose that anyone who sees the show is probably going to get the nods on the Howard Street Bridge afterward.