So, at the moment we’re basically an unemployed schmo who sits around watching TV and fiddling with the internet all day. We’re not very rich and we’re not very important. You wouldn’t know it judging by what we see on a hourly basis though. Lately, flipping on the television or logging into Gmail has made us feel more like a full time philanthropist than a stay-at-home bum.

Just as the consumerism of Christmas seems to start just a little earlier every year, so too do the appeals for donations to worthy causes and campaigns to keep on raising awareness (…which have no ceiling. You can always be more aware can’t you?). As much as we tire of Madison Avenue asking us to continually show people how much we love them by buying them stuff, we also tire of the giverazzi continually asking us to prove our humanitarianism by constantly asking us to give things away. 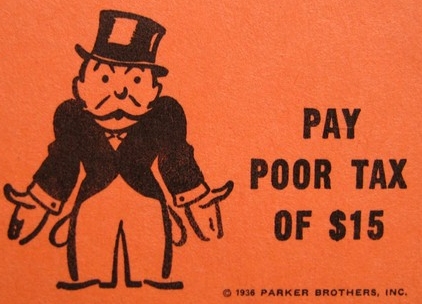 A visual approximation of the Chop during Fall and Winter.

It’s October, which means it’s like breast cancer awareness month or something. Or should we say the other breast cancer awareness month since May and Mothers’ Day have also been taken over by women’s health issues. Don’t get us wrong. We’re not insensitive to cancer. The Chop’s own grandmother died of cancer this very week, Wednesday 10/19. All the same, we don’t need to have our awareness raised every half inning of the World Series or every time we want to get a meal from a restaurant or supermarket. Of course, the end of the month is no respite now that men are in on the act too, growing mustaches and claiming their own month of awareness in November.

It’s not just cancer season though. That’s only the tip of the iceberg. It’s also running season, and as if the Baltimore Marathon weren’t enough of a hassle, there’s a new 5k or 10k or fun run or whatever every weekend now. We don’t know much about running. We stay out of its way and hopefully it stays out of ours. For some reason though, you can’t just run for the sake of running. You have to run for some cause or another, which means bugging people to sponsor your running.

You can even run with your pet. In fact, you can do just about everything and anything with your pet to raise funds for BARCS, which seems to be in a constant cycle of fundraising and event promotion with one event being promoted the very day after its previous event actually happens.

All this running is at least friendly to your waistline, which is good because you’re about to put away several boxes of Girl Scout cookies and school-kid candy bars, as well as attend any number of “dine out for….” events and charitable happy hours.

It’s pledge-drive season too, as you already know if you’ve consumed any public media at all in the last week. We’re not sure why they still call it “pledging” in the age of debit cards and instant payments, but we suppose it still works for them. NPR Is also one of many organizations along with the Kidney People, the Blind People and the Kars for Kids People who are more than happy to give you a tax break for your old car. When we ditched our car though, we went for cold hard cash at the scrapyard.

This year, Fall also signals the start of one of our favorite seasons, the political season. Unfortunately it’s also the season of politicians begging for our money. With it being a city-primary election year, a handful of candidates have been looking for our money all Summer long, and now the president and the DNC have picked up right where Otis Rolley and Catherine Pugh left off. And that’s not to mention Planned Parenthood, Moveon.org, and the Occupy Movement asking us for donations as well.

All of the above is just what takes place before the holiday season rolls around and all the usual suspects start making their feed the hungry and year-end donation pitches. And of course, it assumes no more earthquakes, tsunamis, nuclear emergencies, floods, or tornadoes.

We don’t mean to alienate anyone here or to single out any one entity or cause. We understand that fundraising is hard and necessary and an ongoing fact of life- and we feel like a real bastard for admitting all this publicly. We even give people money sometimes. We’re just tired of being gently reminded, almost constantly.