This isn’t a music blog. It’s a personal blog. The point of this blog has never been anything more than to say “Hey, here’s what we’re doing tonight.” Kind of like Facebook, only not insipid and insidious.

So here’s what we’re doing tonight: We’re going to see Double Dagger at the Ottobar.

We were at their first show. We were probably at 25 shows after that. Tonight we’re going to their last show. If you were to ask us which show was the best, we couldn’t possibly have an answer for that. This is a band that gave 100% every single time. Congratulations guys. We’re proud of you. We always have been. 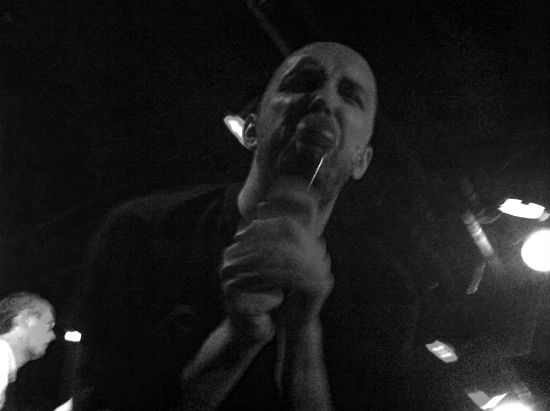 We haven’t got any more to say than that. If you want to read more, check out what’s been said around the web recently:

Baltimore City Paper (10/12) “And they did it with what they call “punk brains,” a mixture of do-it-yourself and never conforming to what’s expected, which also meant trying to push beyond the tropes of punk music itself.”

Baltimore City Paper: (cover and feature, 10/19) “a giant-sized photo of the band, which we plan to assemble and display in a prominent place for whenever we start to forget what it was like to be at a show trying to move away from point-Dagger Nolen Strals on one of his frequent sweaty forays into the sweaty crowd while we’re stuffing toilet paper in our ears because we forgot our earplugs. We invite you to enjoy this poster and start a band.”

Washington City Paper “Double Dagger has chosen to go out in style, building an eight-date minitour that ends with one final hometown blowout on Friday in Baltimore. Before setting out, Strals and Bowen took some time to discuss the timing of the breakup, their posthumous work, and the band’s relationship with D.C.”

Washington Post (Click Track Blog) “The theatrics were memorable and the noise was righteous — but that wasn’t what stuck with me the most. I left obsessed with one song they played. Something about luxury condos…”

JoshSisk.com “They also are a band who managed to write songs about important topics in out lives, and within our communities, but at the same time kept them fun & catchy… something so few punk bands have managed to do. So many of their songs resonate to Baltimoreans (but I imagine, everyone also) as reflecting aspects of the city and community we live in. It’s great to see so many younger kids at their shows… inspired not just by the wild stage hijinx (though there is plenty of that), but by the thoughtful content of the songs.”

The Baltimore Sun “Double Dagger’s end won’t be the last we hear from its members. We spoke to Willen — Strals passed the phone to the bassist because the singer was losing his voice — about the final tour, surprise guests and how he hopes his band is remembered.”

Brightest Young Things (6 streaming tracks with band commentary) “if you HAVEN’T seen them live before, this is your last chance to do so, so GET TO IT. And if you haven’t listened to their records before, fear not, we asked Denny, Bruce and Nolen to pick their “greatest hits” and break them down for you below. ENJOY (and see you all tonight)”

DCist “It’s always something of a punch to the gut when a likable band breaks up, especially when they put in one of our favorite performances of 2010. What’s more, they played at the Black Cat in April with the band that topped last year’s list to put in a strong bid for our favorite show of 2011!”

Tiny Mix Tapes “Double Dagger of Bawmor are shuttin’ down after nine years and playing dair last show downey Ottobar on a Fridee in October. B’lieve. For people not from Baltimore: Double Dagger are calling it quits and playing their final show October 21″

Impose Magazine “Are people telling you things that are touching you in any way since people know this is the last time they will be seeing the band?

Definitely been getting a lot of that. Online and especially at the shows, a lot of people have been saying the band has been really important, has meant a lot to them. People coming up to us to say that the band has helped them get through some hard times. That’s really incredible for us. Lots of big, extended hugs from sweaty people.”

Village Voice “Double Dagger is a Baltimore trio who’ve been antagonizing audiences with their fourth-wall-dropping post-hardcore squalls for more than nine years. Last month, they announced they were calling it quits–rather than fade away with a whimper, the Wham City vets decided to tour ferociously one last time. Tonight, they’ll play their last New York show ever at Death By Audio, so we spoke with drummer Denny Bowen, who also plays with the Dan Deacon Ensemble and Roomrunner, about breaking up, Cake Shop memories, and piss ice.”

Baltimore City Paper (Noise Blog, 10/21) So it is that today, Oct. 21, 2011, marks the last-ever show for Baltimore’s own Double Dagger. City Paper has done an appreciative feature and a do-it-yourself six-panel poster, but we’d be remiss if we didn’t offer some more words from the band. In researching the former, I sat down with lead singer Nolen Strals and bassist Bruce Willen to discuss the band’s music, funny stories, favorite shows, and much more. Selected highlights are below.