There are a lot of great bars in Baltimore, but many establishments are great for different reasons. The bar that’s great in the hour before last call is seldom ever also great before noon. Yesterday we laid out our criteria for what makes a great daydrinking bar. Today, we’re here to give you some of our top choices for daydrinking bars in Charm City.

In a place that used to be a three-shifts town, we’ve got a long history of neighborhood taverns being open almost around the clock. With GM, Crown Cork and Seal and the like gone, and Bethlehem Steel in its last throes of operation, beer and scrambled eggs at six AM aren’t a feature in most neighborhoods anymore. If you know where to look though, you can still quench a mighty thirst while the sun is still high in the sky. 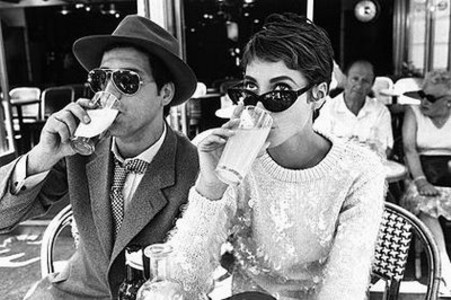 A visual approximation of the Chop daydrinking with Christy Turlington.

This is not meant to be a comprehensive list, nor is it meant to be a generic top five or top ten. It’s more of a geographically based best-bet for when you find yourself thirsty in the middle of the day. It’s also not a list about popping in for a quick one: it’s about daydrinking, not day-sipping.

Tavern is hardly the right word for Jerry’s. It’s more of a saloon. Saloons are perfect for daydrinking, and in 2011 a proper saloon is also about as common as a drive-in theater. Jerry’s is made of wood. The drinks are cheap. The food can really only be described as “home cooking,” featuring stuff like pork chops, stuffed shells, and even chicken noodle soup. There’s just enough light to read the paper or you can watch 1 of 2 TV’s, both of which probably have the sound up despite the fact that they’re tuned to different channels. If that’s not enough for entertainment, you can always scope out the drunkies buying bottles in the attached liquor store with what feels like a two-way mirror effect. Also: a popcorn machine. First call: 8 am.

We’ve sung the praises of Griffith’s on this blog before. It’s a perfect bar for daydrinking. In fact, it’s basically a daytime bar. With hours that run roughly from 9 am- 10 pm, it’s definitely not for the late night crowd. Sure, there are other dive bars where you can drink cheap beer all day in the neighborhood, but Griffith’s is the only one where you’re not going to have to put up with people fencing stuff from the Rite Aid for dope money or bringing young children to the bar or any of that other Hampden shit. Instead you’re more likely to get an earful of stories about how things used to be 40-50 years ago. First call: 9:00 am.

Long Johns is starting to gain some major indie cred with karaoke-singing cool kids coming up from MICA or slumming it from the Avenue bars (if that’s even possible). Fear not though… during the day it’s a dank dark space that keeps out both the daylight and the hipsters. The drinks are dirt cheap even before the specials and with a $5 veggie burger and fries, we can afford to eat lunch 3 times on our bender. First call: 11 am.

The Owl Bar is definitely the nicest place to make this list. Sure, there are divier bars nearby with cheaper drinks, but we know from past experience that the Owl Bar is a prime spot for daydrinking. The only natural light available is filtered through stained glass, lending your borderline behavior an almost holy aspect. While you may pay an extra buck or two per round, it’s made up for in quality both behind the bar and in the kitchen. If the place starts filling up with the post-work crowd, just take the elevator up to the 13th floor for happy hour. Thank us later. First call: 11:30 am.

Cheap Beer isn’t cheap at the Midway. A Boh and a decent tip can be $5. But where else you gonna go, huh? That’s a lot cheaper than any of the neighboring bars. It’s cheaper than the Inner Harbor and cheaper than Power Plant Live. If you want to drink downtown, you need to get to the Midway and stay at the Midway. It won Best of Baltimore awards from the City Paper in 2008 and again in 2010, and for good reason. It’s a spot to do some hard drinking among a retro-pinup-doll vibe, but there’s nothing cute about it: you get the impression that there just might be a gun behind the bar someplace. Cop a stool here as soon as they open and stay as long as you can and you’ll see the whole life of the Block pass in and out of the doors. It’s the best show on Baltimore Street. First call: 10:00 am.

That’s a lot of daydrinking already, but somehow we’re still thirsty. Join us again on Monday for the third and final installment in this series, when we cross Baltimore Street and explore the best daydrinking spots in South Baltimore.