Well, it’s pretty hot outside. In the dead of Summer, most people want to get away with wearing as little as possible. Jorts sightings have been at at all time high in Baltimore recently, and tank tops and flip flops are out in force as well.

We would hope that it doesn’t still need to be said in 2011, but apparently it does. The old rule still stands: No shirt, No shoes, No service. 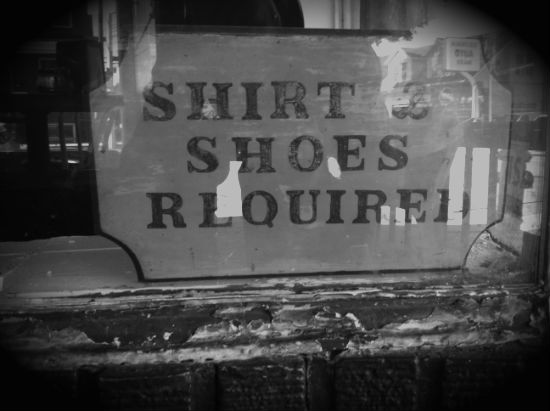 These things may be optional in your backyard or rooftop deck, but out in the streets, shoes and shirts are still mandatory, no matter what the temperature. Sure, okay, if you absolutely must you can wear sandals the right way but you’ve got to have something on your feet.

This is Baltimore City… it’s filthy. Aside from the typical urban grit and grime, our streets and sidewalks are often full of broken glass, chicken bones, and all other manner of hazards. The Chop happened to sight a girl walking barefoot down Cathedral Street a few days ago, and we were nothing less than revolted. Walking or (God forbid) running barefoot in an urban street is not only dangerous, it’s disgusting. Not even Rex Ryan would tickle those toes.

As far as shirts go, you’re gonna have to keep that on too. Nothing says absolute white trash redneck like going shirtless publicly. Have you ever seen COPS? The shirts to skins ratio on there is always at least 2/5.

It doesn’t even matter if you’re a sitting congressman who hits the gym regularly… shirtless is simply not a good look on anyone. This summer, just keep it on. You might even think about a lightweight cotton or linen jacket as well.