We’re going back to Pigtown tonight. It’s been more than a year since we’ve gone to Pigtown for anything, and the last time we did it was for the first Pigment opening. It’s funny; we said then that Pigtown should hold more cool events to lure people from the rest of the city into the neighborhood once in a while, and here we are a year later having not been back once. 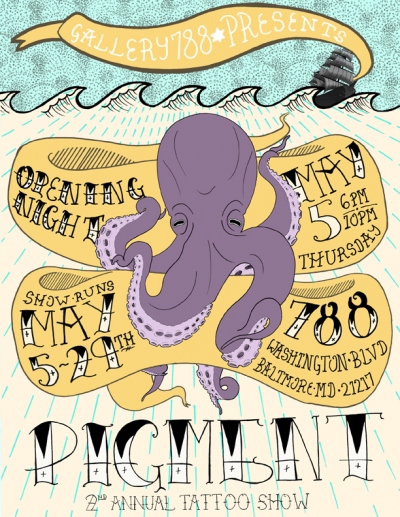 Last year’s Pigment opening was duly impressive. Gallery 788 had the walls overflowing with great work, and the floor overflowing (literally, people were spilling out onto the sidewalk) with some of Baltimore’s most creative and stylish people. Cans of Boh were flowing and records were spinning, and we even managed to score a framed drawing for a ridiculously cheap price which still holds a prominent place on our bookshelves.

We say show up early, because pieces are going to sell tonight. With a 6pm start time you’ve got four full hours to enjoy the art and the company, and figure out which of the eventual afterparties you’d like to get in on. There’s bound to be no shortage of celebrations, as today also happens to be Cinco de Mayo. Or you can do like us and eschew drinking holidays completely, and drink bourbon at home instead of tequila downtown.