Most of you may remember that there was a torrential rain about two weeks ago. It rained hard for 30 hours straight. It was the sort of Baltimore downpour where Thames Street threatens to flood, gutters back up with Utz bags and hair weaves, and broken umbrellas are forsaken all over city streets.

The Chop was dismayed during this rain when a teeny-tiny spot on our bedroom ceiling increased in size several times over. It was clear that water was coming in somehow. Not much of it, but better to stay on top of these things early. We were going to have to call a roofer. 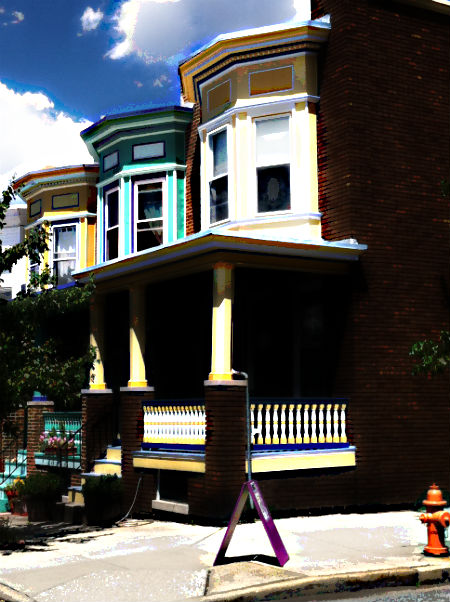 Now, we’re still relatively new at this home-ownership business. We haven’t got a lot of experience in hiring contractors, so we thought we’d seek out the best we could find. In their best of 2010 issue, Baltimore Magazine printed a ‘throwdown’ among two area roofing contractors, and declared Fick Brothers the best roofer in the city.

So we called Fick Brothers. The lady who answered the phone (a secretary? a receptionist? Who else would answer a phone?) wouldn’t or couldn’t take our appointment for an estimate. She insisted that so-and-so would call us right back, which she did… more than two hours later. By that time, we had already set up an appointment with another company.

The runner up in the Baltimore Magazine article was Brothers Services. They were at least capable of taking an appointment, but that’s about all they were good for.

Now, the Chophouse is a rowhouse of the type illustrated in the picture. There is a small bit of roofing over the bay windows on the second floor, then a parapet wall, then behind that begins the main roof. The stain on our ceiling is near the bedroom windows, and it’s clear that the leak is not in the main roof, but somewhere near the front.

On the appointed day, Brothers showed up two hours late. When someone did arrive, it was a kid who couldn’t have been more than 22, tops. The card he handed us said “assistant manager.” We were pretty dubious about this at first. Even if this kid was totally competent at actual roofing work, he was certainly not a professional estimator. When we call on a company that is so well regarded, we’re calling for someone with many years, or decades of experience.

The kid went up the ladder, and when he came down our suspicions were confirmed. He pointed out 3 areas where water could be coming in, and recommended tearing out and replacing the entire section of roofing above the windows. And this was at a minimum. Then he started in with the “Well, we have an in-house mason we could call for that wall and blah blah blah…” He couldn’t even give us a proper estimate, but had to “talk to his boss” and said he’d email it to us. We suspected he was trying to get us over a barrel, and when the estimate came in the next day it was $2184.

Thanks to social media, word of mouth travels a hell of a lot faster than it used to. We put word out that we were looking for an honest roofer, and by the end of the day a friend came through and recommended Horizon Roofing. He said that Ken (the boss) had come out to his rowhouse and assessed a problem, and ended up telling him how to fix it himself. That was all we needed to hear.

When Ken came out for an estimate, he wasn’t two hours late but actually two days early. We were running out the door just as he arrived, but he left a detailed estimate in the mailbox that highlighted all the same areas over the windows, but his repair recommendations came to a mere $395. With a free servicing if it should leak again within 30 days.

We know who we’re about to hire, and we’re sure we’ll be writing Ken a thank you note in the very near future.