It’s easy to get a little cynical about Station North sometimes. Even with all of the success stories in that neighborhood in recent years, it can be tempting to look around at all the still-crummy warehouse lofts, the custom bike shops, fashion-obsessed co-eds and sometimes obscure and inaccessible music scene and think “Welp, the City built the hipsters a nice little playground here.”

Indeed, it’s not difficult to forget about the higher end of culture in the neighborhood. There’s The Charles Theater, of course, and the everyman, and even the Meyerhoff and the Lyric between Mount Royal and North Avenues. And then there’s Station North’s other art school. 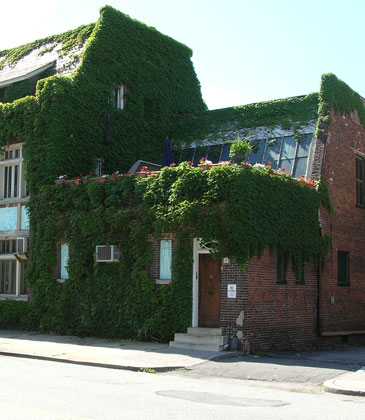 The Schuler School of Fine Arts hosts a retrospective of its late founder's works today. 2-6 pm.

The Schuler School of Fine Arts has been a fixture in Station North since before there was a Station North. Well before. Just look at the building. You don’t grow that much ivy overnight, and for more than 50 years the school on Lafayette Avenue has been a cloister dedicated to the study, admiration and emulation of the styles and techniques of the old masters.

At today’s exhibit (which also ran yesterday) you won’t be seeing any paint splatters or lines and shapes. No half-cocked political statements. No absurdist riffs on absurdity for the sake of irony. No silent, endlessly looping video installations. Dan Deacon’s not hosting any dance parties at Schuler.

The Chop has walked past the Schuler School hundreds of times. Possibly into the thousands. We’ve always sort of thought of it as that closed up little building where a few people go to paint so many flowers and fruit bowls and reclining nudes, and sculpt busts of old guys with beards. For years, that’s been the extent of our knowledge of the place. To us, the place has taken on the sort of mystery that a Masonic lodge or an Orthodox church can carry with it, and if you’ve felt the same way, we’d encourage you not to miss your chance to take a peek inside.