Well, just when we thought we had learned our lesson about buying tickets for things in advance, we completely failed to secure tickets for tonight’s appearance by Terry Gross at MICA’s Brown Center. This is pretty disgraceful, since we’ve known about this for several months now. We even put it on our calendar and everything, but didn’t bother to look into buying tickets until it was well sold out. (Maybe just as well though; $50 is not a cheap ticket for a public radio host.)

Gross is, of course, the host of NPR’s Fresh Air, a daily arts and culture interview program which is easily one of the best things on radio and one of the most popular podcasts on iTunes. 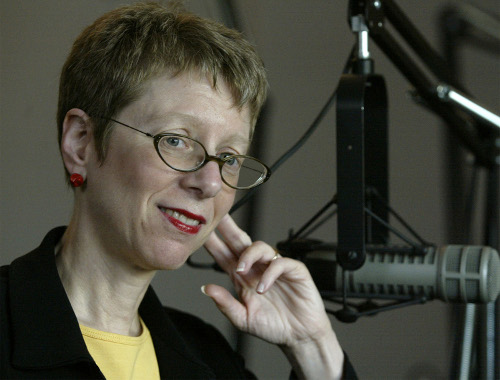 Even though we’re not going tonight, it gives us a good excuse to relate an anecdote which we found funny at the time.

We were in a smallish German city on our trip to Europe earlier this year, where we found a tiny little record shop on a corner near the edge of downtown. There were some good vinyl and posters on display in the windows, but the first few times we went by there the shop was locked up tight.

Eventually we found it open one afternoon, and although we don’t mess around with vinyl records, we thought we might find some European exclusives as a souvenir for Roommate or even some eBay gold for our own benefit. We gave a nod to the proprietor who was busy with his macbook and started browsing the stacks. Instead of playing music we were listening to some old man go on about something or other over the speakers in English for several minutes. When he finally wound up his monologue, Terry Gross’ voice came over the air.

“Oh!” We say “You’re listening to Fresh Air! I didn’t realize you had that in Germany.”

When we said this to the guy behind the counter, his face lit up as brightly as a Christmas tree. It turns out that they do not have Fresh Air in Germany, but that he was listening via iTunes. When we mentioned that we regularly listen on the radio, and live sort of near Philadelphia (people abroad do not know where Maryland is), his perfect English became very excited. We recounted some of our favorite episodes, including the infamous Gene Simmons interview which was one of the most awkward broadcasts in the history of radio.

As it turned out, this record store guy was a huge and rabid fan of Fresh Air, and was trying to work his way through the entire archives of the show. Once he found out that we’d been listening for years, there was no shortage of questions, most of which we had no answers for.

There was one earnest question he did ask though, which we could answer with certainty:

“So, in your country, Terry Gross is a big star? Like Oprah?”

If you’ve never heard the Gene Simmons Fresh Air interview, we strongly encourage you to click through and listen to it. It is not available in the NPR Archives, and it’s a solid hour of Simmons insulting Gross and NPR and making a series of very inappropriate and sexist remarks while making himself out to be a primal filthy rich sex god. In our opinion, Gene Simmons is a fucking clown, and Terry Gross is one of the greatest interviewers working anywhere today.