What? You think you’re done with Halloween? You went out raging last night and now you think you’re just going to stay at home and watch Simpsons’ Halloween special reruns and eat pumpkin flavored junk food? Well, Halloween’s not done with you, Baltimore.

You’d better get started on washing off all the beer and lipstick stains you got on that costume last night, because you’re going to need it again tonight. As luck would have it, all of the reasonable, moderate and sane folks are heading down to DC to be reasonable and moderate together, which means that by default, the rest of us left in Baltimore are unreasonable, immoderate, and insane. Should make for a hell of a Devil’s Night. 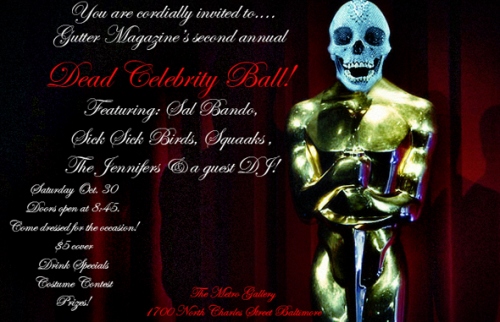 As if we didn’t have enough to do last night, we’re starting off tonight with a trip to Patterson Park for the Creative Alliance‘s Great Halloween Lantern Parade and Festival. From what we’ve heard, last year’s parade was really quite a spectacle, done well down to the last detail. Word was that it was on of the very rare events that’s billed as ‘fun for the whole family’ that actually is fun for the whole family.

Afterward we’re heading back up to Station North, where we’ll be around and about the rest of the night. We’re definitely going to make the Metro Gallery our home base though. Our friends at Gutter Magazine are back there tonight with their second annual Dead Celebrities Ball. They’ve booked in four of Charm City’s best post-rock bands including old favorites Sick Sick Birds as well as Squaaks and the Jennifers. Plus we’ll finally get a chance to check out the relatively new(ish) Sal Bando, who we haven’t had a chance to see live yet.

With a grown up set like that, we can pretty much guarantee that the Misfits covers and Halloween cheesiness will be kept to a minimum, which is a great relief at this point. Best part? It’s only five bucks at the door, sucka.