The astute among you will quickly notice that the shape of the graphic below is not Puerto Rico, but is in fact Australia. It’s Australia because that’s where John Sharkey III fucked off to after Clockcleaner. Sharkey returns to the US tonight with his new project Puerto Rico Flowers for their only 2010 US date at Sonar‘s Talking Head stage. Welcoming Sharkey back tonight will be Fan Death Records label-mates and unfuckwithable local trio Pfisters as well as DC’s Screen Vinyl Image. 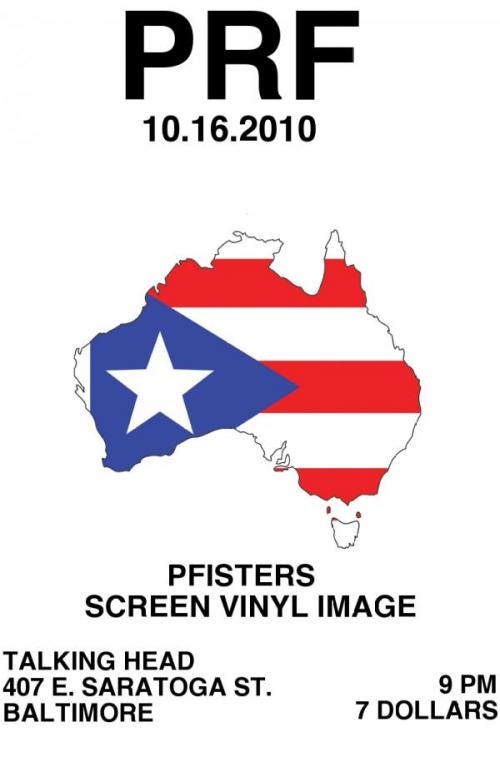 We’ve got the feeling that Puerto Rico Flowers is going to be one of those bands for whom there is no middle ground at all. Anyone unfamiliar can slap on headphones and listen to about ten seconds of their 4 ep and decide instantly whether they want to listen to it on repeat all day, or whether they want to run screaming at its mere mention.

The Chop is squarely in the former camp, and we predict the forthcoming full length will be going into heavy rotation on the iPod for late drives home or nights out on the back deck. Sharkey has always been the sort who makes a very particular sort of music. It’s the sort that he wants to hear, and he makes it precisely because it doesn’t yet exist in the world. Whether anyone else listens or not seems to be irrelevant. PRF represents what has become all too rare in 2010… something entirely new.

That said, the influences are immediately discernible. The 4 ep easily conjures the best work of Joy Division, the Damned, Bauhaus, et al, and will become seminal listening for fans of those stripes.

The next time you hear someone staunchly defend Baltimore’s music scene as being better than DC’s and more genuine than Brooklyn’s don’t dismiss it. Shows like this one tonight stand as proof.