Oh Monday. It’s been a long and busy weekend in Baltimore. Everyone’s tired. Most people are sunburned. Some of us are still hungover. With everything that’s gone on over the last 60 hours or so since everyone quit the workweek, it makes sense that no one feels like doing anything and there’s fuck all going on. We don’t feel like doing anything either, so we’re giving today’s post over to a public service announcement. 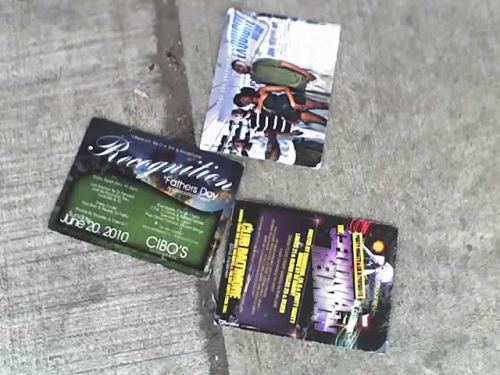 This is a very poor promotional strategy.

We’ve been noticing a trend of late that promoters for various parties/events or establishments have been leaving postcards scattered along the sidewalks in certain areas with high pedestrian traffic. These brightly colored and gaudy pieces of litter are like a trail of paper breadcrumbs, illustrating exactly the path on which some lazy flier-man walked. ‘Here’s where he crossed Calvert. Here’s Where he went down Baltimore Street. Here’s where he ran out of fliers and called it a day.’ To the area promoters who are guilty of this we say:

KNOCK IT THE FUCK OFF!

It’s bad enough that we have to deal with an endless barrage of sub shop menus, fliers under windshield wipers and a new copy of that Sun Plus piece of crap every other day. Sidewalks strewn with several hundred promo cards for some strip club or the latest ‘grown and sexy’ party are absolutely the last thing this city needs.

If the city council is still looking for new ways to gin up revenue through taxes, fees and fines, we’d like to make a humble suggestion…