Here’s a question for you: When did trivia nights completely take over Maryland’s bars and restaurants?

When it comes to weeknight recreation, it seems to us that our fathers’ generation used to take part in all manner of pub-related activities; everything from league bowling to tournament pool to darts, softball or shuffleboard. When you look around Baltimore’s bar scene today though, one pastime sticks out like a giant green afro: Trivia. 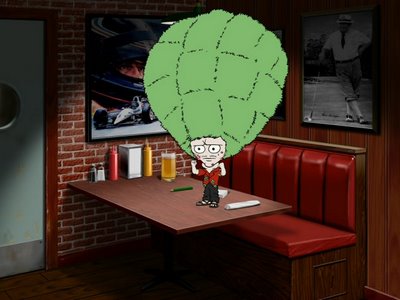 Much like Lost, the lounge was a mental creation of Wayne the Main Brain the whole time.

It’s beginning to feel as though trivia is becoming to Baltimore what poker is to Las Vegas. The intrepid intellect could almost quit his day job and become a professional on the trivia circuit seven nights a week (although it can be tough to pay the rent with restaurant gift certificates and the promotional swag from liquor distributors which passes for jackpots in some contests).

Much more than a passing fad (when was the last time you sang karaoke, anyway?) local pub quizzes have become a burgeoning and fairly competitive industry here in Charm City, with several outfits employing full time staffers, as well as several part time trivia MC’s. It’s not hard to see why. Not only is bar trivia a pleasant diversion, it’s also a highly sustainable business model. Bar owners get to fill what might be otherwise empty bar stools on slower weeknights, trivia game producers can trade not only on their own brand, but on the reputation of the host location, and players get to participate in a free, fun social activity with a chance at winning a (ahem) wide range of prizes.

Locally there’s something for everyone, trivia-wise. From the Hopkins PhD candidate to the local Cliff Clavin to the garden variety barfly; from the once-a-year dinner party that stumbles in by accident to the twice-a-week tournament players competing for prizes in the thousands, there are local games to suit all levels of skill and interest. In Chicago they’ve even identified and profiled the 7 People You Don’t Want to See at Your Trivia Night, all of whom can also be found in taverns from Hunt Valley to Annapolis and beyond.

Coming up on Thursday, we’re going to attempt to offer a closer look at the five main promoters producing trivia nights in Central Maryland, as well as your best bets for pub quizzes in Baltimore City.