So, the Baltimore Chop has already gone on record as giving brunch our seal of approval, but if there’s one thing we like more than fancy hotel brunch, it’s gotta be DIY punk rock brunch- which is exactly what we’re doing today.

This is late-breaking developments, Baltimore! We were tentatively planning to do the day-tripping thing today, and check out the DC Record Fair at the Black Cat before taking the metro down to Nationals Park to see our O’s reign victorious in the Battle of the Beltways, but when we suggested this to Roommate he say “No way Jose! Domingo esta los Bicycletas, Mariachis, y Burritos!!!” or something to that effect. 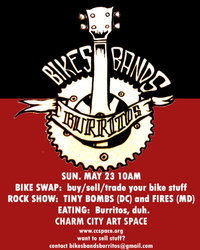 Yes Baltimore, today is the annual celebration of Bikes, Bands, and Burritos at Charm City Art Space. We’re going to treat this as brunch since we’re lazy and won’t be rolling out of bed until noon, but to a lot of other people, it means much more than that.

This week was National Bike to Work Week and as we all know, North Baltimore loves bikes. In addition to being a worthy cause on its own, Bike to Work Week has been endorsed by some of the Chop’s favorite blogs, namely the Magnificent Bastard and Kempt. Although the Chop recommends you follow local custom and throw your bike in the back of a co-worker’s car and go to happy hour on the way home from the office.

In an extra little bit of kismet, today’s show also coincides with the Baltimore Bike Jam and Kelly Cup, and if you pedal fast enough you can even do both.

But down to brass tacks: if you want to buy, sell, or trade a bicycle or some bicycle parts, show up at 10 am. If you want to participate in a punkrock group ride around the city, show up by 10:30. And if you want to do like the Chop does and see Tiny Bombs and Fires and nosh on tasty veggie Mexican food (swap napa cabbage for kale there) show up at noon sharp, because that’s what time they’re playing.

It’s all pot luck, and the Chop loves to wow ‘em with the veggie pot luck surprise, so we’re definitely bringing a dish. We even made a trip to the Upper Fells’ Point supermercado the other day, so we’ve got some authentic ingredients cold chillin’ in our fridge.

And if you’re still unsatisfied with that, you can always walk around the corner and get a proper brunch at Joe Squared (who knew?) and go authentico with one of their many tequilas like we just might.