Not really. I’m actually on a ship. But if you want to get your little Foursquare badge-y thing, this would be a hell of a way to do it.

Today the Chop is visiting what is probably Baltimore’s most interesting and least visited attraction, the Liberty Ship SS John W Brown. 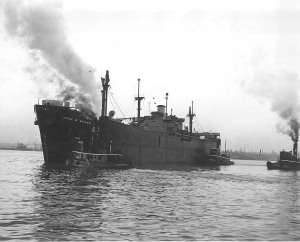 How do we know it’s the least visited? Because it’s really, really hard to visit. We know. We’ve tried to go aboard about four times already. The all-volunteer run ship is only open to visitors Wednesdays and Saturdays from 10 am until 4 pm, when and if she’s at her berth (as she is still operational and sometimes moves for tours, maintenance, goodwill port calls in other cities, etc).

Until this weekend, we didn’t even know she was open on Wednesdays. A trip down to the docks at 2 pm found the crew of the Brown filing down the gangway and raising it against visitors early, apparently just because they felt like it. 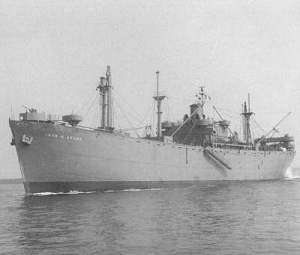 But today is the day. No more fooling around. The Chop is going to get up and out of bed as early as possible and go down to Canton to see the ship, which is not only important to the history of WWII, but is an important piece of Baltimore history, as it was built at Sparrows Point. 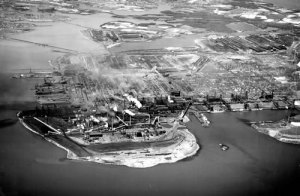 Sparrows Point built 385 liberty ships, some in as little as 28 days each.

The full story of the liberty ships and the John W Brown can be found at the Project Liberty Ship website. The Brown is one of only two surviving liberty ships in the world, the other being the Jeremiah O’Brien in San Francisco (not to be confused with the later-built victory ships of a different design).

We’ve actually been lucky enough to see the Brown steaming out of the harbor, and it was a fascinating site. We can’t wait to climb the gangway, ring the bell on the forecastle, stroll the quarterdeck, check out the view from the bridge, see what’s cooking in the galley, and gape and gawp at the authentic triple expansion steam engine down below and the .50 caliber guns on the fantail.

Yeah. The Chop’s a bit of a boat nerd.

The John W Brown is berthed at pier 1 on Clinton Street in Canton, south of the First Mariner tower. Parking is available inside the wharf building on the dock itself. The gangway is generally down Wed. and Sat. at 10 am. Admission is free but donations are accepted.