If there’s one thing the Chop can not endorse, it’s preppy style. We give thanks every day that we were lucky enough to be born in Baltimore and not in New England or Long Island or some equally pretentious, WASP-y place. We wouldn’t be caught dead in madras, ribbon belts, boat shoes or anything with a J. on the label.

That said, the older we get, the more we appreciate the role that a few good polo shirts play in balancing out a wardrobe. With Spring already arrived and Summer right around the corner, We’re going to be seeing a lot more polos on the streets of Baltimore, and most of them are going to be boring and far too ivy-style to suit our tastes. Like this:

If you held a mirror up to your asshole, this is what it would look like. Ralph Lauren charges $98 to make you look like a total shart.

The polo shirt was originally pioneered by French tennis star Rene Lacoste in the 1930′s for use on the tennis court. Since then his design has been adapted to a wide range of sports and become a cornerstone of preppy culture.

But it’s not just the adoption by preppies which leads to our natural distaste for polos. Golf shirts, which are really just polos by a different name, have become the standard weekend wear for old white upper-middle class suburban Dad types. Nothing says “I’m spending my 2 weeks’ vacation in Myrtle Beach” quite like a shirt with Arnold Palmer’s name on it.

The real killer of the polo shirt though has been the rise of the service and high-tech industries. A knit polo and pair of khakis no longer makes you look as much like an up-and-comer as like an $8.00 an hour drone in a big box store.

Still and all, it is possible to pull on a polo in high style if you choose carefully. Here are five choices which are high on style and low(ish) on prep factor. They’re more Baltimore than Boston, and more downtown than country club. They look about a thousand percent better than Lauren, Izod, Hilfiger, Lacoste, Nautica, etc. Plus you won’t be looking like your dad. 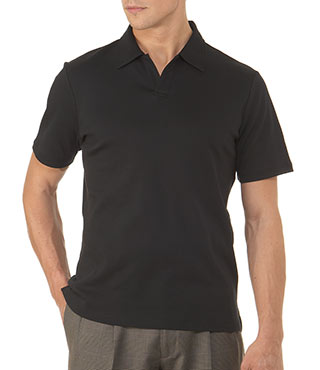 We can definitely recommend this shirt by Perry Ellis because we’re wearing one right now. With 100% pima cotton it might just be the most comfortable shirt we own. If we could get away with sleeping in it and never washing it we certainly would. We also give it high marks for a perfectly cut placket with no buttons. Going buttonless is still a bit fashion-forward and eliminates any confusion about whether or not to button or unbutton. 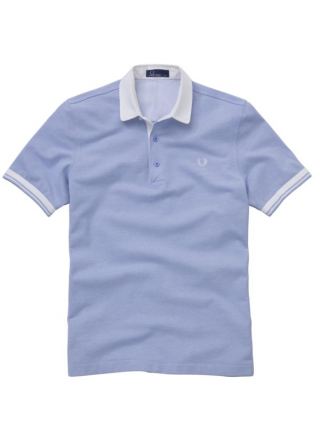 There’s a lot to like about this one from Fred Perry. The Fred Perry heritage might be the most likable of all, but coming in close behind it is the informal collar which is a definite deviation from the norm, as well as the oxford weave as opposed to a more common knit. We prefer woven to knit any day of the week. The only thing not to like might be the 55 pound price tag (about $80.) These bastards almost never go on sale either. 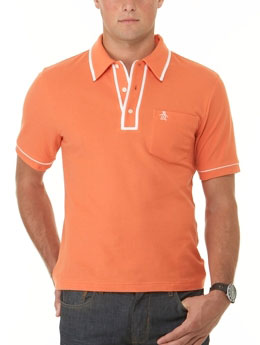 We’d be much obliged if any of you Choppers wants to go down to South Moon Under and buy us one of these to wear down to Camden Yards this summer. This definitely beats freebie T-shirts and jerseys for style in the bleachers. The Original Penguin Earl is that rarest of rarities, a classic that hasn’t been worn into the ground. A 100% cotton knit, a slim fit and a broad piping around the placket all add up to an orange polo that will take you beyond the ballpark.

We stumbled on to this one by accident, but it looks like a winner. Alternative Apparel makes the Noonan out of 100% pima cotton in three subdued colors and adds a pocket to the left side. The rest of their offerings look almost as good.

You should probably head down to Light Street and pick one of these up like today. American Apparel is one of those stores where you can get one great piece here or there, but don’t want to outfit yourself there from head to toe. This is one of those great pieces. Its got a casual cool look, and close fitting organic cotton is bound to make you want to lay around your apartment striking sexy poses for no apparent reason. Plus $32 is a really unbelievable price for a shirt that’s made in the USA from organic cotton.