But Spring is here, Baltimore! Our idea is back, and after much mixing and measuring and tasting and tippling, The Baltimore Chop is proud to debut the Lemon Stick Cocktail. 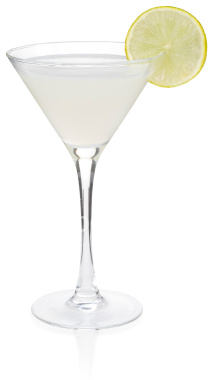 The lemon stick should have an opaque white appearance, like this.

The lemon stick is one of our favorite things… an exclusively Baltimore tradition which hasn’t been cheapened by overexposure and continuous gratuitous references. It claims it’s origin at Flowermart, and can be found at spring and summer festivals throughout the Baltimore area. In honor of Flowermart, which begins today at Mount Vernon Place, we give you the Lemon Stick cocktail. It’s every bit as refreshing as the eponymous treat, delicious enough to serve to Grandma while she wears her fancy hat, and strong enough to make you stop and smell the roses (and maybe lie down in them for a while).

Technique: Mix vodka, Rumple Minze, syrup, and the juice of one lemon wedge in a shaker with ice. Shake vigorously. Strain over new ice in an old-fashioned glass and add second lemon wedge as garnish. Or, strain into a chilled cocktail glass and add a twist of lemon.

Comment: You may wish to use just a bit less than one part of RM or Syrup. Use any brand of vodka as long as it is of acceptable quality. Do not attempt to substitute generic peppermint schnapps for Rumple Minze. RM is 100 proof. The cheap stuff is typically 30 proof. This drink depends entirely on quality ingredients. Do not use commercial sour mix for any reason. If you really want to get fancy, serve over crushed ice with a peppermint stick as garnish.

It’s also worth noting that this is an original recipe. We couldn’t find anything very similar anywhere we looked. We hope it will catch on and spread throughout the land of pleasant living. Make it a new summer tradition.