It’s Monday Baltimore. It’s a new week, and the perfect time to introduce the first in an occasional series of posts called House Rules. House Rules will focus primarily on Barroom etiquette. The art and science of buying rounds, what to drink and how to tip, rules for last call, how to choose the proper bar for the right occasion… all will be covered. Over time the House Rules category will become a comprehensive guide and one-stop resource for proper behavior in the modern bar and nightlife scene. 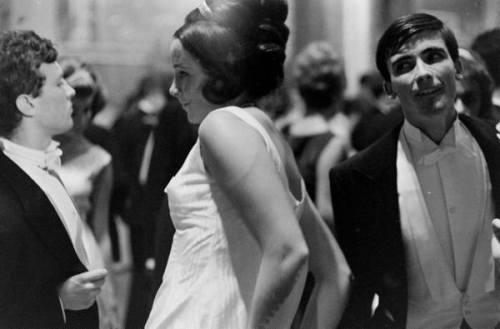 A visual approximation of the Chop's weekend.

It constantly amazes us how many people we know in Baltimore that we don’t actually know. It’s a shameful testament to the poor social graces of the Chop’s friends, who have failed to introduce us. It’s shocking when we come across someone on Facebook who shares more than 20 Friends whom we’ve never actually met socially.

The point was driven home at a show recently when a friend failed to introduce us to a friend of theirs. It really stuck in the Chop’s mind, because we had encountered the same non-acquaintance at the same bar a month prior, where she was chatting with Roommate, who also failed to make the introduction. We bumped into her a third time this weekend, this time with no common friends present. It would have been nice to be able to say hello and chat for a bit.

Now, the Chop is no wallflower, and isn’t afraid to introduce himself to anyone on principle, although in practice this can be very socially awkward, as a self-introduction will never go as smoothly as a proper social introduction.

An introduction must be made. It sounds simple, but the first and most important step in making an introduction is that you actually have to do it. This is a case where doing it wrong is far preferable to not doing it at all. Don’t ever assume that two people you know know each other also. If you’re unsure, there’s no shame in simply saying “Do you two know each other?” In any case, if you’re in a bar and someone you know joins your circle or takes the next stool, an introduction is required.

Respect is due. Social Primer gives the guidelines for who should take precedence in an introduction. A lot of the old rules don’t fully apply to Baltimore nightlife, but it is a good idea to present men to women. All things being equal, the Chop says give deference to the friend you’ve known longest, or to whom you’re closest.

Say who’s who. In any case, you should say the full names of all the people you’re introducing. It’s also good form to state your relationship to each party or how you know one another. For instance: “Brian Matusz, this is my cousin from Colorado Garrett Atkins. [then to Atkins] I met Brian at the University of San Diego.” or something similar to that.

Note what’s common. It’s always good form to let your friends know if they have anything in common, aside from knowing you. In our example above, you might say something like “Garrett has just been signed from the Rockies, and Brian was actually born in Grand Junction.” This will go a long way toward helping two strangers feel much more familiar with one another.

State the facts. It will be polite to note something current and significant about each person. If you’re introducing a guitarist in a local band to someone who regularly does volunteer work for a non-profit, you should say so. If you’re introducing someone who engages in no particular notable activity, it is also acceptable to address a hobby or interest they might have. This is to encourage conversation between your friends.“Garrett can play first or third base and Brian likes dinosaurs and gummy bears.”

It’s pleasure, not business. While there are exceptions, it is traditionally impolite to mention someone’s job during a social introduction. Not everyone particularly likes their job. Some people can even be downright ashamed of what they do for a living. Still others have good jobs they may enjoy, but which are conversational dead ends. No one wants to discuss desks and cubicles and memoranda while they’re out at night. A fairly large income gap between your friends might also be a factor. Personally, the Chop has a very interesting job which we like and usually don’t mind discussing, but it’s uncommon enough that it provokes the same set of questions often, and answering them can become tiresome quickly.

Keep the conversation going. If you’re in the middle of a conversation you mean to finish when one of your friends approaches, You should pause to make a quick introduction and then resume the conversation, now including the person who just approached. If we were talking with Brian Matusz about who in Baltimore serves the best hamburgers when cousin Garrett stepped up to the bar, we might say to Atkins “I was just telling Brian about the burgers at Alonso’s. Have you had a chance to try Abbey Burger Bistro in Federal Hill yet?” Which will go a long way toward making a new arrival feel welcomed and valued.

And really, isn’t feeling welcome and valued the goal with all social interactions?