The Business is coming to Baltimore tonight. We should be excited about that. We should be dusting off our Doc Martens and brushing up on the finer points of football hooliganism. We should realize how lucky we are to get a chance to see one of the greatest hardcore/punk bands of all time, and within walking distance of our house.

But we’re not. Instead we’re sitting on the couch saying ‘meh’ and ‘feh’ and other made up words that denote a general sense of apathy.

See, we’ve already been to three shows in the last three days and we just don’t have it in us anymore to feign excitement over something that was thrilling in 1979 and has been watering itself down ever since. We’re a grown-up punk. Grown up punks are supposed to slow down a little. You can’t claim you’re street punk when you have a mortgage. 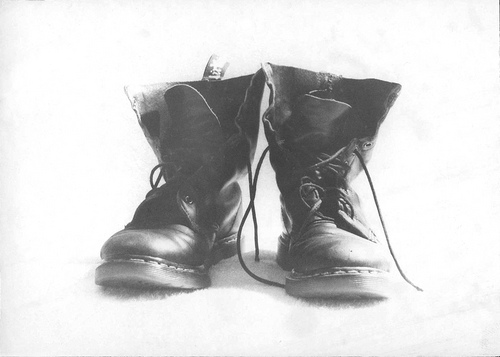 Most old bands are the worse for wear.

We suppose no one told this to the Business. We suspect they know it anyway though. A recent publicity photo on their myspace page doesn’t hide the wrinkles very well, and shows them to be a bunch of guys who have more in common with today’s baby boomer parents than their ‘Suburban Rebel’ kids. While you’re there you can check out the new single, which is banal, amateurish, and frankly beneath the dignity of a band as great as the Business was.

We can’t fault them entirely. British punks and skins in the 70′s and 80′s never claimed to be brilliant musicians. They never had designs on getting real jobs or having a life after punk either. We suspect that the Business and countless other bands like them (not just punk bands either) continue to recycle themselves and play the same old chords because it’s all they know how to do in the world. They were the voice of their generation, but unfortunately their generation’s time has passed.

We propose, here now and for the record that any band should be a band for twelve years only. No more. You get 2 years to practice, play local clubs, and get your first record out. After that you get 10 years to go as far as you can and create as much good music as possible. At that point the music gods should yank your band license. You break up, and forget about any reunion tour nonsense. You’re free to form a new band, of course, or go solo; but leave the past in the past.

One example of someone doing it right is Baltimore’s own Ryan Shelkett. He’s managed to remain relevant and interesting by allowing room for musical growth and experimentation. If he were still running out the same old songs from the Blank/ Dead Red Sea days no one would listen, great songs though they were.

Ian MacKaye has come pretty far from his original sound without losing any love from anyone. Even though it’s been damn near 30 years since Minor Threat played live, their songs are as beloved as they ever were. And while Fugazi was maybe the one band that could have carried on gracefully indefinitely, had they not stopped, the Evens likely never would have happened.

John Reis is another great model for change. As popular as Rocket From the Crypt was, for our money Hot Snakes was Reis’ best work, and we’d rather see the Night Marchers live than a Rocket reunion any day.

So we’re not going to the Ottobar tonight. Instead we’re going to do some work around the house. Watch the Orioles blow another one, and have a quiet dinner at home. And we’ll probably be listening to Suicide Invoice at some point too.