Every once in a while, the Chop likes to play a little game called Name a band that could compel us to drive to the 9:30 club. So far, it’s been a losing endeavor. It’s hard to think of any band in America right now that could do it. Some acts (like Morrissey or the Pixies) could, but they’ve outgrown 9:30, and are usually prohibitively expensive. We’ve taken a principled stance against almost all reunion tours, and turn up our nose at them. Most of our favorite bands going today are too small to book into 9:30, and the ones who fit there (like Ranier Maria or the Hold Steady) We’ve seen too many times before to bother with 9:30.

The Gaslight Anthem is the one band who might maybe convince us to set foot inside the 9:30 club.

So we’re totally skipping out on Ted Leo when he plays there tonight with Screaming Females and Obits. 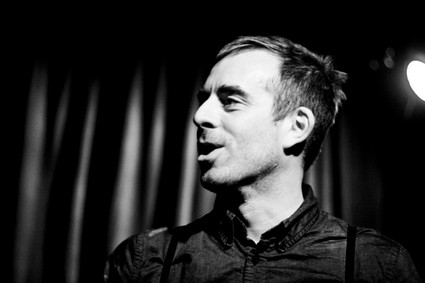 We can understand why some indie kids go totally nuts for Ted Leo. We get it. Problem is, we like him just okay. The Chop has seen Ted Leo plenty of times before, and in truth he’s always been one of our favorite performers to heckle. Maybe it’s because all those kids do love him so much. Maybe it’s because he’s a good sport and can give as good as he gets. Maybe it’s because yelling out the names of Elvis Costello songs hits a little too close to home. Whatever it is, we can scarcely help ourselves when Ted hits the stage.

So if we’re not rocking out in DC tonight, what are we doing? Being a responsible fucking grown-ass adult, that’s what. Stacking up that paper, that’s what. Everyday we hustlin’, that’s what.

Yeah. We’re going down to the union hall for the monthly meeting today. While we’re there, we’re going to collect a few G’s that are owed to the Chop. After that, we’re going to stop fucking around and file our taxes so we can get our $8000 Obama Money Tax Credit that we’re owed for buying our stately North Baltimore pleasure dome.

What’s our reward for acting so responsibly all day? We get to go to Target and bring home one of these, so that when we go to watch Brian Matusz pitch tonight with a six of Clipper City and a bag of Utz, it’ll be in icy-cool conditioned air.

The best part? Roommate’s going to the show, and we’ve got the place to ourselves for the night.