One of the best things about living in a city like Baltimore is that you can give yourself a free education. We’re not talking about any “school-of-hard-knocks, streetwise bullshit.” No. Anyone in this town who loves learning for learning’s sake is lucky enough to be able to put together an actual curriculum and pursue just about any field of study as a hobby.

Not only does Baltimore have a wealth of resources dedicated Full Time to giving you a free education, like Book Thing, Baltimore Free School, and the Village Learning Place; we’ve also got one of the Nation’s best libraries, to say nothing of the other museums and cultural institutions in our backyard.

As if that weren’t enough, every Baltimorean has access to top-notch colleges and universities, which most people don’t realize are willing to teach you for free. We already tipped you off to Daniel Shea at MICA, and tonight we can’t stress enough that you should come up to Goucher to see Adam Stab. 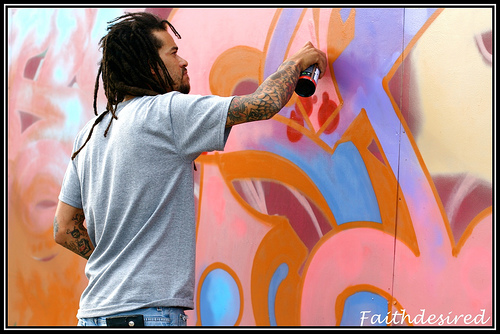 We shouldn’t have to tell you who Stab is. Like any successful writer, his reputation precedes him. He’s Baltimore’s version of the Easter Bunny… hops around all night and leaves beautiful, colorful things wherever he’s been. You’ve never actually seen him, but you’re glad whenever he leaves you something.

Speaking of free educations, there may be no better example than Stab himself. With very little traditional schooling and no college degree, Adam Stab has been able to do for two decades what many classically trained artists never do: Make a living making the art that he loves. Having moved quietly up the ladder from bus stop benches to studio work and even corporate commissions, Stab is uniquely qualified to explain not only the stylewriting sub-culture, but Baltimore’s place in it as well.

Listen closely Baltimore: Chances like this don’t come around often. Graffiti is still very much a product of the night and of the fringes, and the chance to have it explained point by point amounts to nothing less than cracking the new urban Da Vinci code. If you miss this tonight, it goes back underground. 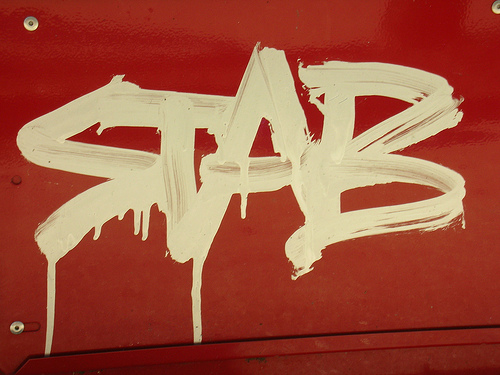 Available at a bench, mailbox, road sign, or lamppost near you.

Street Art: A Lecture on the Baltimore Graffiti Scene will take place in the Pinkard Community Service Center in the Athanaeum of Goucher College. (number 2 on this PDF map). Tonight’s lecture is a part of the ongoing Baltimore City Forum series.