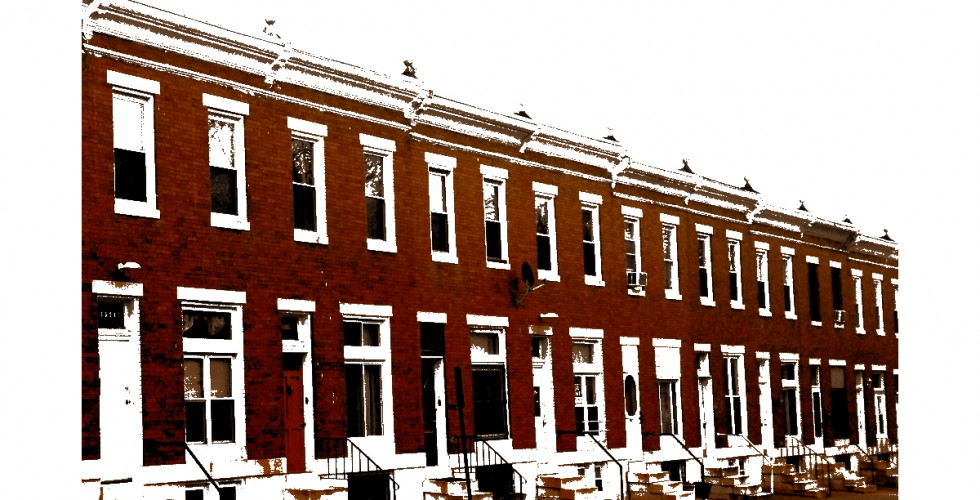 After writing up a post on the history of Baltimore City recently we were inspired to go out and pick up a copy of The Baltimore Rowhouse Mary Ellen Hayward and Charles Belfoure. We really can’t recommend it highly enough. The authors begin all the way back in the 1700′s when the city consisted mostly of large land grant estates and does a great job of explaining how those estates were eventually subdivided and developed, from the very first wooden shacks to the golden age of builders like Keelty and Gallagher, who built most of the iconic Baltimore rows to modern infill construction and renovation.

The book also did an outstanding job of explaining the different styles of rowhouses found in the city, and illustrating what got built where- and when and why. At times it goes deeper into details on architecture and building technique than most people would ever need to know, but remains an interesting read nonetheless. But what if you want to know the various rowhouse types without spending $27 and reading through 200 pages? Never fear. The Chop is here with an illustrated book report.

This post is meant to show the most common types of rowhouses found in Baltimore, and to match their names to their pictures. We’ll also do a tiny bit of explaining along the way. The Chop is, of course, not an architect or anything, so if we’ve got anything wrong here or if there’s something that should be added we’d encourage those more in the know than we are to send us an email. 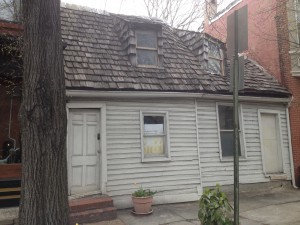 Wood Frame Houses. Are these the oldest houses in Baltimore City? Yep. They’re on S. Wolfe St in Fell’s Point, which was one of the earliest developed areas of the city. The fact that they’re made of wood indicates they were built before 1799 when wood frame construction was made illegal in the city. This is likely what most of the original housing in Baltimore town looked like. 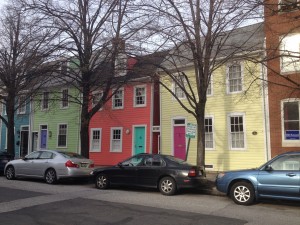 Here are some wood frame houses nearby on Ann St, which are also likely among the oldest in the city, but probably a few years more recent than those above, and clearly better maintained. These begin to resemble what we think of as rowhouses.

Federal Style Houses From 1800 Federal style houses begin to appear in the city’s oldest neighborhoods. In general large, fine houses were built on main streets, smaller versions erected on side streets, and tiny versions on alley streets. Before cars and buses presented the problem of noise living on a large, wide street was very desirable and this construction pattern was in wide use all over the city from 1800 until the early 1900′s. Above is a large Federal house on Central Avenue alongside a small alley version in Seton Hill. 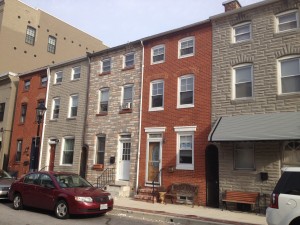 Two Story and Attic Also very common around the oldest neighborhoods of the city near the harbor is the Two Story and Attic rowhouse. These were mostly occupied by blue collar workers’ families and don’t tend to vary much wherever they appear. 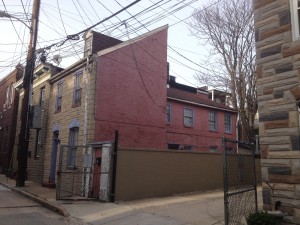 Half-House Appearing mostly in alleys or small side streets the half house is only one room wide and one room deep with a lean-to at the back. These may or may not have been meant to be added to later but many were not. 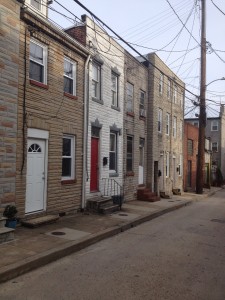 Alley Houses An alley house is only two rooms deep, though most have since had small kitchens and bathrooms added (Before 1907 the city had no sewers. If a house is older than this it would have had a separate shithouse in the back yard and the current bathroom is retrofitted.) In Britain these are called a “two up-two down” but here we call them alley houses or crackerboxes. Having lived in one of these as a rental we can tell you it’s pretty miserable. 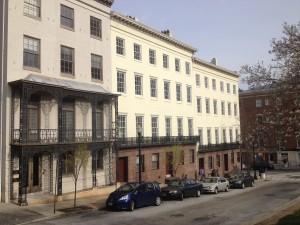 Greek Revival Favored by the rich in the mid 1800′s the Greek Revival style was in heavy use around Mount Vernon, which was at the time home of the city’s monied elite. What was built there by leading architects influenced the rest of the city, especially around parks and squares. Early developers invented a scheme whereby they could donate a plot of land to the city for a park, then build around it using the park to enhance property values. This is how places like Franklin Square, Union Square, Johnston Square, etc came to exist.

Picturesque Houses Picturesque styles like the Queen Anne and others represent the second wave of Big Money houses which began to appear north of the Washington Monument in the late 1800′s. Some of these were truly ‘town houses’ serving as pied-a-terres for incredibly wealthy owners who owned country estates outside the city as well. They generally appear around Mount Vernon, Station North, Barclay, Bolton Hill and Reservoir Hill, all of which took their turn as the city’s most fashionable neighborhood for wealthy buyers.

They’re not what we think of today as just another rowhouse, and while they are limited to a few neighborhoods their influence on the rest of the city’s housing design was important. These houses were influenced by the latest styles in London and Europe, and builders of working class houses wasted no time scaling down and copying elements for use on much smaller houses. Things like stone porches and false attic windows which appeared on some Daylight rows owe their inspiration to these designs, and in places like Highlandtown even ordinary Italianate houses sometimes appeared with tiny front balconies or spires. Also shown here in the lower right corner is a row of houses in Remington which are an extreme example of builders shrinking and copying the houses of the rich for a working class market. 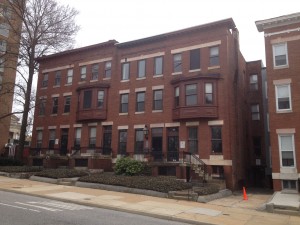 Renaissance RevivalHouses like this one on West 29th St aren’t notable for their proliferation, but were very influential to the bulk of rowhouse design.

Italianate Houses Shown here in the two and three story version this is what we think of as the Classic Baltimore Rowhouse, especially the two story version with marble steps and other marble finishes cut from Beaver Dam Quarry in Baltimore County. These were built from the late 1800′s until the time when the Automobile took over after WWI, in generally the same pattern described above: three story versions on main streets, two story ones on side streets and tiny ones in the alleys. In 1908 a law was passed mandating a forty foot width for streets, so parts of the city developed after then used only a main street/side street approach.

Swell Fronts Also shown in the two and three story version, some builders of Italianate houses chose to swell the fronts to break up monotony and give buyers a little more room. 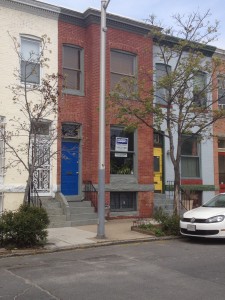 Square Fronts The book didn’t mention this particular type of house but we’re just going to go ahead and refer to it as a square front. It’s a squared off version of the swell front and isn’t very popular in Baltimore although it can be found scattered here and there. You’ll find many more of these in DC. 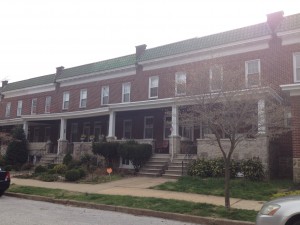 Daylight Rowhouse Pictured above is the one of the most common versions of one of the most common house types in town. This particular row on Tudor Arms Avenue is extraordinarily well maintained and probably looks much like it did when it was built around 1920. The Daylight rowhouse usually has a three bay wide floor plan that allows light into all six rooms. While finishing touches vary, they’ve all got roughly the same basic design and are much more comfortable to live in than two story Italianate houses. 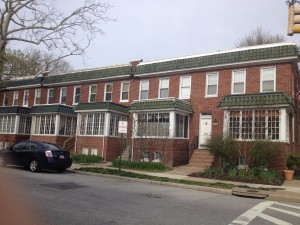 Daylight Sunporch One of the variations on the Daylight house is the Sunporch version, which is worth noting as its own subtype. All of the green tile is actually painted, formed sheet metal.

Porchfront Houses Again shown in two and three story versions and sometimes called sunlight houses, Porchfront houses were built at the same time as the Daylight rows. These two house types were the first to have porches as well as little front yards and maybe a garden and garage space in the back. They were built to compete directly with single family homes going up in the suburbs. After they became popular builders began slapping porches on most house types, although if you call a house a ‘porchfront’ most people are going to assume you mean the type pictured here with a bay window on the second floor and a covered porch as a feature. When painted brightly like the ones in Abell pictured above these are sometimes referred to as Painted Ladies.

English Rows Inspired by English country cottages, English rows are kind of the love it or hate it country cousin of Baltimore rowhouses. You can find them near the city’s borders in places like Dundalk, Ednor Gardens (pictured) and even up around Pimlico. 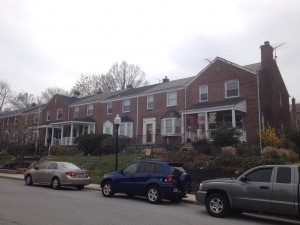 Neocolonial Rowhouses Some of the last ‘old school’ rowhouses built in the city, Neocolonials can also be found around and outside the city’s borders and have a distinct suburban feel. They’ve got decent yards on both sides and larger, coveted end-of-group units. Many of these were built after WWII when vets were coming home to good jobs and access to VA loans.