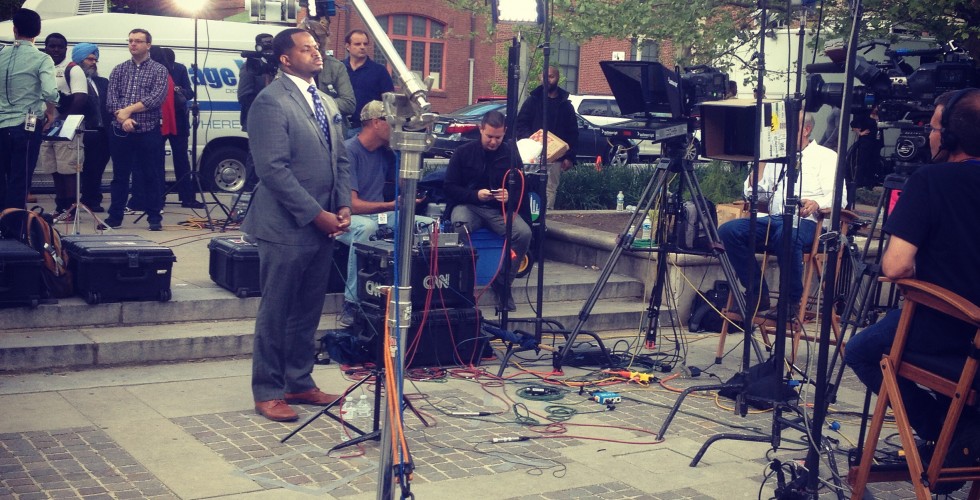 Saturday’s curfew protest on Keswick Road in Hampden was a completely misguided and weak effort that should never have taken place. There was no possible way it could have ended well, and now that the curfew is over it’s still got people talking and has proven to be the absolute shitshow we knew it would be before it even happened.

The point of the Keswick protest was ostensibly to point out the racism that exists in the city, but does that really need pointing out? Did we have thousands marching all over the city because we were unaware of inequality and racism? Keswick organizers also wanted to point out the uneven enforcement of curfew violations, but this logic too is badly flawed.

The type of people out at Keswick were clearly of the ‘ally’ variety. They seemed to be the very people that we’ve been bitching about lately when we talk about the gentrification of Hampden. It’s clear that they don’t understand Baltimore or its police very well.

The first thing we want to get straight is that this week the corner of Penn and North was not indicative of ‘Baltimore’s black neighborhoods.’ It was ground zero for protests and was an entirely different scene than what went on in dozens of black neighborhoods throughout the city which can be described as not much at all. Many people in outlying neighborhoods both black and white who wanted to defy the curfew simply went out to the county quietly and without fanfare. As for the rest of the city, it’s not like there was a giant dragnet out to sweep up anyone caught in the street. From where we sit it seems like everyone arrested this week was either actively protesting or out committing crimes, such as in Brooklyn on Tuesday night. The vast majority of arrests for curfew violations were at Penn North and City Hall, and a couple other locations that were political hotspots like Greenmount near the jail. Many were professional activists and not city residents. If you can show us cases of ordinary black folks getting arrested for simply being in their neighborhoods, we’ll be happy to have a look. But why bother with us? Take it to CNN or City Paper or any other outlet who’d be happy to run with a story like that. There were 486 SOE-related arrests made last week, which is just under 100 a night. It sounds like a big number but it doesn’t leave a lot of room for ordinary folks getting swept up innocently.

There’s been much made of comparing the Keswick protest to the treatment of one particular individual at Penn North that night. It’s pretty clear that that guy, who showed up in a shirt emblazoned with FUCK THE POLICE in very large letters, was prepared to face arrest that night. It was day 5. He went down to the very center of the cop-national guard-media circus and stood around yelling obscenities at the cops. The unedited video is out there if you want to see it and you probably should, especially if you’re one of the people circulating the photo of his arrest. It was obvious he wasn’t going to leave without being arrested. Likewise many others arrested at the same time were activists who set out to cause trouble like the idiot woman who admitted on live TV she didn’t live in Baltimore and was ‘out gazing at the stars.’ (For the record: our position is to support amnesty for all arrested on curfew violations including and especially those arrested at Penn North.)

The truth is that Baltimore does enforce laws unevenly. That enforcement is underpinned not so much by racism as by The Golden Rule of Baltimore which is Don’t Be an Asshole! There’s a ton of disorderly conduct on the streets of Baltimore every day. The people who get charged with it are belligerent jerks who are causing a problem for someone else. People go around with open containers all the time, the ones who get charged with it are drunks who need to be off the street anyway. Loitering, littering, disobeying a lawful order- if you get charged with anything like that it’s a sure bet you’re an asshole who ignored a warning first.

Contrast that demonstrator’s actions with the behavior of the Keswick demonstrators. That protest was originally conceived as a picnic in Sherwood Gardens. How twee is it possible to be? It was then moved to Hampden (likely much closer to where the bulk of participants live) and billed as a silent protest- aka We’re just gonna stand here quietly and not give anybody any lip at all. But as amateurish as those demonstrators are, they’re still out to make a political point. They’re not ‘just ordinary folks going about their lives’ while they’re out there protesting. Showing up with signs that say “we’re not talking to the media” is in fact making a statement to the media, who were presumably issued an engraved invitation.

So the cops come and they tell them pretty nicely to go home. They let 10:00 pass and take a second and third warning and think they’ve made their point. It’s obvious not a single one of them were prepared to go to jail, and they all slunk away to their $2500/mo rowhouses Because they all need to go to their jobs and pay that rent on Monday morning. But what if they had been ready for jail?

There were cops in riot gear on Keswick. There was pepper spray and handcuffs at the ready. If those people had wanted to get maced, tackled and thrown in a van all they had to do was stand there another minute and start yelling fuck the police. It certainly would have happened. When you behave differently you get treated differently. That’s what we saw on Saturday.

We’re here to tell you that when a certain secret punk rock show happened and was white-attended in almost the exact same location the cops showed up a lot more quickly and ended it with much more urgency. People were not slinking home with their hands in their pockets that night.

But the Keswick demonstration was misguided in another way as well. It was pretty unanimously felt among city residents that a 7 day curfew was excessive and unjust and should never have been imposed to begin with. That Keswick episode was largely a response from younger politically-aware white people to the images floating around on social media of younger apolitical white people out drinking with their neighbors in gentrified neighborhoods.

Now, this is maybe a sensitive topic and perhaps one of the dirty little open secrets of white Baltimore but there is a huge divide between the yuppies of the harbor neighborhoods and the hipsters ranging from Mount Vernon to Hampden.

One of the biggest problems this week, as we’ve seen it, is everyone in Baltimore trying to claim the moral high ground in a time of crisis. That’s another golden rule of Baltimore: there is no moral high ground here and there never has been. We’ve been a part of hipster Baltimore for a long time now and we’re very familiar with its sins. They are the Chop’s sins too.

There are a lot of people who look at photos of the Millennials outside their houses past ten and want to decry the injustice of unequal enforcement without stopping to think that maybe it makes them so mad because they had something against those people before this week. And that something is a bit of class resentment. We’ve got it too, hence the Authenticity post.

The stereotype of the Canton Millennial and the Hampden Hipster didn’t come out of thin air and it’s not a stretch to say the two groups don’t rate each other very highly. But just because you live uptown and have good taste in music and art, work in the nonprofit or creative sector, and read Ta-Nehisi Coates and watch Melissa Harris Perry doesn’t mean you’re any fucking better than Fed Hill bros are. You chose to move to Baltimore, and to your very tiny affinity part of white Baltimore. Coming down on people who are simply sitting outside their houses in defiance of a dumb and unnecessary curfew is showing your ugliest side, the side that wants to see yuppies locked up just for being yuppies.

Because really, if the goal is for ordinary Baltimoreans to be able to enjoy their lives that’s exactly what those Milennials were doing. If their version of curfew defiance looks slightly different than yours or the version at Penn North- get the fuck over it. It’s still curfew defiance and that’s a good thing.

The coverage of curfew enforcement on Saturday looked a lot like this.

We’re not sure why Deray McKesson gets a pass on the curfew himself, but when he and others went to white neighborhoods to check on uneven enforcement it was an entirely false comparison. The idea was to hold quiet neighborhoods up to the yardstick of Penn North and Gilmor Homes, but to compare enforcement you’d have to go to quiet black neighborhoods as well. Did anyone in the media or social media go to Cedonia to check the state of enforcement? How about Belair Edison or Sharp Leadenahll or Walbrook? Were black folks getting yanked off their porches and unfairly arrested there? Of course they weren’t. Nor should they be. No one should.

The Derays and the Keswick allies of the world want to make things look a certain way, and want to reinforce their own political viewpoints. They want a piece of that elusive moral high ground and want to pat themselves on the back for exposing an injustice that’s not really there to begin with.

We’re not sure what it looks like to the rest of the Internet, but to anyone who actually lives in Baltimore City Saturday night was a smoke and mirrors shitshow that played out on two corners in less than an hour while 99% of the city got on with life as best they could. It was another embarrassment in a week where we’ve had too many of them.