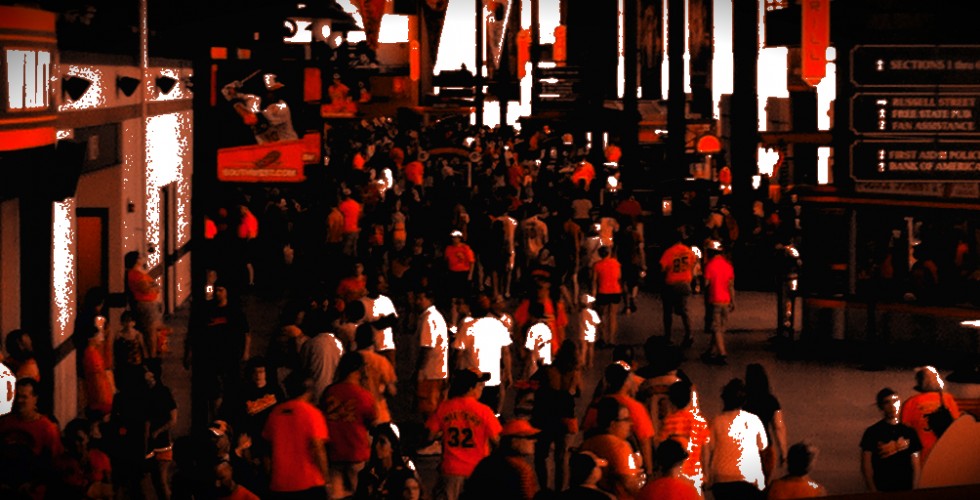 We noted a few years ago that Baltimore has somehow become Festival City, USA. As Summer is winding down here in the Land of Pleasant Living, we find ourselves in the week between Hampdenfest and the Book Festival, which traditionally marks the end of the Summer Festival Season. But we wonder, Baltimore, if you’ve noticed what we’ve noticed over the last several Summers?

As we move from street fair to street fair, from SoWeBo to Charles Village and from the Greek Festival to umm, the other Greek Festival we’ve been noticing that each festival contains so many of the very same vendors time and again, and so, so many of them are hawking various Baltimoreana. We know you’ve seen it: the austere portraits of abandoned houses, the various takes on the marble stoop/painted screen motif, the romantic images of a skipjack or a tugboat gliding easily through the harbor past the Domino sign… not to mention the assorted handicrafts and folk art like rowhouse fronts on bricks for door stoppers or painted crab shell Christmas tree ornaments. None of it is particularly original or inspiring.

But that’s just the tip of the iceberg. Once you introduce sports into the equation the clichés and tackiness go through the roof. And if there’s one thing Joe Sixpack can be counted on for it’s to tell you exactly what he thinks or likes or hates by wearing it on a T shirt.

With the ubiquity of the Internet, a huge influx of transplants looking to boost their Baltimore cred/adopted hometown pride, the Orioles winning the AL East for the first time in a generation and fans being justifiably pissed off at the Ravens’ front office and ownership we’ve arrived at the conditions for a perfect storm of crappy T shirts flooding the downtown streets.

As the Orioles proved at the season’s end last year with their fan-designed shirt contest any jerk with a laptop can design a T shirt. (Yes, even the Chop who has no design experience whatsoever!) And since 2012 when both our major teams showed marked improvement the number of jerks with laptops who want to get into the T shirt business has gone through the roof. It’s only natural, we suppose. Who wouldn’t want to start their own clothing line when you realize that you need no experience and little to no capital to do it? You can have your own line delivered and ready to sell in under two weeks with $100 or less in capital. Here’s how:

Step one- Steal an idea. You don’t need a ton of design know how or a fancy graphics program. Just jump on the bandwagon of one of the more common motifs out there already. (More on this later.)

Step two: Visit one of the dozens and dozens of online shirt wholesalers out there. Their sites allow you to specify exact shirt types, sizes and colors and they’ll do the printing as well. Allied Shirts is a great example. Play around with this tool on their site to see what shirts cost wholesale. (They are usually less than $5 per unit.)

Step four- Get to shilling product. Set up a basic eCommerce site (also free), list on eBay, Amazon, Craigslist, sports blogs and forums, get on Twitter, FB, Pinterest, Instagram, etc. and make the rounds of local shops, tailgates, Camden Street, etc. Alternatively use a service like Spreadshirt which will do the manufacturing and delivery for you AND set you up with your own eCommerce site.

Step five- pat yourself on the back and count your filthy lucre. That’s all there is to it.

Now, a little more about those designs. Every professional sports team has its name and logos copyrighted. There is a very long list of what you can’t legally use when designing an ‘homage’ to a particular team or player or what have you. The list of things you can use is very short, and is mostly full of clip art garbage that no one would wear if you paid them. Therefore most bootleg hometown pride shirts fall into some very narrow classifications like things squarely in the public domain (place names, civic logos) or trendy grassroots designs (memes).

We don’t want to call out any specific designers or apparel shops in this post. That is not our intention. If you want an idea of the kind of crap we’re talking about have a look at a site like Cafepress. We admit that our stance here may be a bit snobbish, but so what? There are even a few bootleg designs out there we really like to be honest. But every designer has more misses than hits, and the following is a list of design tropes that are, in our opinion, completely played out, clichéd and hokey and which should be done away with faster than your Ray Rice jersey:

And there’s probably several more which escape us at the moment. But that’s just what won’t get you sued. As Welcome to Baltimore Hon pointed out earlier this week, some of these design hacks have no qualms about blatantly stealing trademarks and then trying to copyright them as their own.

So as we get into October and the playoffs and you become tempted to throw down $25 of your hard earned cash on some piece of junk T shirt that will end up as gym wear (at best) or buried in the bottom of your closet (most likely) just don’t. Instead take this opportunity to re-read our guide to Ballpark Fashion, Baltimore Style and then take that $25 and buy this Carhartt orange flannel shirt or this slim cut cardigan or even this Banana Republic orange striped polo shirt. In the end you’ll feel better about your purchase, and more importantly you’ll look better too.